[content warning: not fluffy and nothing to do with the french]
If you haven't read Annie Dillard's Pilgrim at Tinker's Creek you really should. It is an extraordinary book about a woman who found an entire world and a lifetime's edutainment is a small stream that ran past the back of her suburban home. One of her arresting anecdotes reflects on the dog-eat-dog bug-eat-frog world that she carefully observes: "He was a very small frog with wide, dull eyes. And just as I looked at him, he slowly crumpled and began to sag. The spirit vanished from his eyes as if snuffed. His skin emptied and drooped; his very skull seemed to collapse and settle like a kicked tent. He was shrinking before my eyes like a deflating football. I watched the taut, glistening skin on his shoulders ruck, and rumple, and fall. Soon, part of his skin, formless as a pricked balloon, lay in floating folds like bright scum on top of the water: it was a monstrous and terrifying thing. I gaped bewildered, appalled. An oval shadow hung in the water behind the drained frog; then the shadow glided away". The giant water bug she is describing is probably Lethocerus americanus which preys upon small fish and ambibians. Dillard Prev-aside. I was reminded of that classic because other examples of insect triumph appeared over the blogorizon recently: 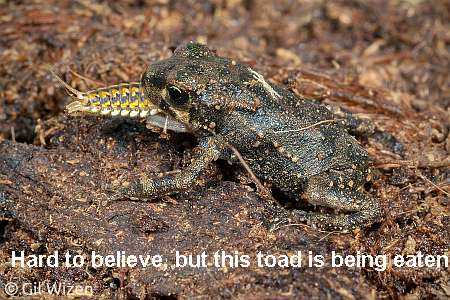 That arresting caption was added by the photographer and entomologist Gil Wizen in a an essay about The Biter Bit - the surprise, almost outrage, that we vertebrates feel when one of our number gets eaten by a beetle. It's more visceral (ho ho) than St Charles of Darwin's unease about bug-on-bug predation [bloboprev]. "I own that I cannot see as plainly as others do, and as I should wish to do, evidence of design and beneficence on all sides of us. There seems to me too much misery in the world. I cannot persuade myself that a beneficent and omnipotent God would have designedly created the Ichneumonidae with the express intention of their feeding within the living bodies of Caterpillars, or that a cat should play with mice ".
Via MeFi: where the commenter painquail digs up more natural brutality: like cuckoo chick chucks chicks
Posted by BobTheScientist at 08:46