"Laws, like sausages, cease to inspire respect
in proportion as we know how they are made".
This quote is often misattributed to Otto von Bismarck, the Iron Chancellor, but we know better.  Whoever said it, the sentiment is certainly applicable to sausages: you really don't want to know what goes into them.  When I was a dirt-poor graduate student, living in the Western suburbs of Boston, I used to eat whatever looked cheap or was on a 4 for 3 deal at the local supermarket.  One Winter I discovered hot-dogs which were tasty and amazingly cheap.  You could buy a tin or a jam-jar of the things immersed in brine and sold for half-nothing, with a few slices or toast and a tin of beans I could stoke up for a cold night before going back to work early next morning. That went on for a few weeks . . . until I read the table of contents one  evening while the wieners were warming. It is 35 years ago so I don't have the label in front of me but it went something like "pork, chicken, pork byproducts, chicken meat by-products, chicken non-meat byproducts, water . . . and trailed off in a long-tail of lesser ingredients. I wasn't so delicate that I refused the meal, but it didn't go down well and I never bought or ate hot-dogs again. In my research at the time I learned the ominous phrase mechanically-recovered meat MRM: which starts with the bones and sinew that have been cleaned of flesh as close as a butcher's knife can work. These parts are put in a mill with steel ball-bearings until they are polished a brilliant white: a pink slurry is periodically tapped off from the bottom of the vat - and sent to make hot-dogs and chicken nuggets.  Another name for MRM is mechanically separated meat MSM.  In the trade the resultant paste is called pink slime or with a spuriously scientific gloss that a good acronym generates "lean finely textured beef" (LFTB) or "boneless lean beef trimmings" (BLBT).  Is it just me or does it all remind you of the acronyms conjured up by the rainbow of gender-and-sex options that are now on the table: MSM (ooops that again), LGBT, LGBTI, LGBTQ, BLT no strike that: bacon lettuce and tomato should definitely align with the meatacronyms

I was down at the Outlaws last Sunday to help them through their enormous Christmas cake, do a little bit of heavy-lifting, cook their dinner, and even catch the last 20 minutes of the Ireland vs England rugger match (Triumphal 19-09 score). I came away with one of a pair of packets of sausages that Herself had bought on a promotional 2 for 1 deal - we have a lot in common when it comes to bargains, The Beloved's Mother TBM and me. I knew that they wouldn't get round to eating both packets before the sell-by date and sausages was one of the things my mother taught me to consume quickly - or risk a long talk with the porcelain telephone.  I'm quite a bit bigger than TBM is, so there was little she could do to keep both packets of sausages. <Bullying in the home alert> 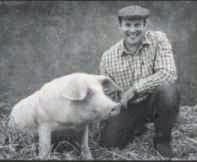 This is what I got: "6 leek & cracked black pepper Irish pork sausages made in Co. Monaghan". With a picture of "Tony O'Regan One of our farmers" and an uncredited pig - who isn't smiling as broadly as Mr O'Regan. It is just possible that they have already removed the pig's hind-legs to make a couple of delicious hams. A week ago, I found in our fridge two

"Basted pork chops
with added water
100% Irish Pork"
which I mis-read as "with 100% Irish Water". Nowhere in the small print did it explain what, why or how these chops were "basted" - a process of re-slathering cooking meat with exuded juices; but it is interesting that water (which is the cheapest filler available) is here trumpeted as a miraculous additional ingredient - like blue whiteners in laundry detergents.

Mais revenons nous a nos saucissons!  Q. What have Supervlau ordered up for our dinner? A: Irish pork (70%), Water, Pork Fat, Rusk (contains Wheat), Corn Flour, Leeks (2.2%), Salt, Flavourings, Black Pepper, Sugar, Yeast Extract, Stabiliser (Triphosphates), Preservative (Sodium Sulphite), Antioxidant (Sodium Ascorbate), Sunflower Oil, Natural Port Casings. I've put the table of contents in green because it is clearly an act of patriotism to eat these things. "These Irish leek and black pepper sausages were made with selected premium cuts, fresh leeks and cracked black pepper, using a slow-blend process to create a full texture and flavour."  You may be sure that they were quite delicious, because they have been designed by food engineers (in Co. Monaghan).  Water is essential, not least as a lubricant for the slow-blend process but you don't want it leaking out of the sausages as/when they cook; so you add filler (meal) to absorb the water.  It's clever to add two sorts of filler Rusk (contains Wheat), and  Corn Flour because ingredients are listed by descending % and you don't want it to seem that there is more filler than pork fat. Stabiliser (Triphosphates) is also interesting - adding this opens up the protein (meat & meal, both) matrix so it holds more water.  All these ingredients are regulated by the EU so that the chicanery of the food industry is reduced to a level commensurate with consumer health. There are upper limits for the amount of water which is added to food - the regulators are trying to tread the line between legitimate ingredient and cheap adulterant.  It is analogous to tax-avoidance (which is perfectly legal) and tax-evasion (which is a mortal sin) . . . or is it the other way round?