Unless you are a surgeon, theatre nurse, caterer or delicatessener you really don't need to obsess about hand-washing. The token rinse you give your hands after having a tinkle is really ineffectual in killing or removing significant numbers of pathogenic bacteria; and may have the effect of rising some grimmo microbes from your deep cuticle. And you probably believe that the water from the taps is microbe-free because of the ferocious treatment of drinking water in the Western world. But is it? The water from our bore-hole was recently certified as being clear of Coliform and Pseudomonas, which are the main culprits for excessive post-consumption toilet use.

Did you ever pause to wonder about the water quality on board aeroplanes? Where does the water come from? Is it treated effectively? A group from U.Limerick, the nearest college to Shannon Airport, did ask those questions and went out to gather data from a fleet of long- [N=8] and short-haul [N=31] planes. The resulting paper was published in PLOS One 3 years ago Assessment of the bacterial diversity of aircraft water: Identification of the frequent fliers.

They sampled water from the forward and aft galley taps of the planes and also from the Water Service Vehicle WSV - the tanker that tops up the reservoirs of planes when they are serviced between flights - and the local source which fills the WSVs. Although the last category is only a partial solution because the plane water is presumably also augmented at the far end of the flight at whatever tap is available in JFK or CDG. This sampling was carried out every 48 days as part of the aircraft maintenance programme between Jan 2009 and Jun 2013, a period of 1640 days, so you'd expect 1640/48 = 34 sample points for each of the (8 + 31) aircraft. But rather than 1330 samples, they only report obtaining 184:
No explanation is offered for the patchiness of the sampling regime, which might call into question the QC of the whole study. Nevertheless from these 184 samples 308 different bacterial isolates were identified as variants in the 16S rDNA gene.  That suggests that every sample point had some bacteria. They came from a wide variety of known species: 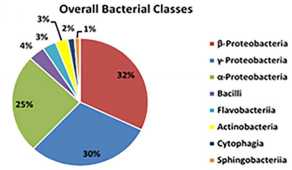 This must be an underestimate of the bacterial load because part of the isolation protocol was to grow bacteria on Petri dishes and it is well-known that most bacteria are sufficiently fastidious that they just won't grow on any specified medium let alone the particular agar mix chosen by the UL team.

Have you ever heard reports of a case of illness caused by consuming water on a plane? No, me neither, UL neither. One of the reasons is that even a long flight is short for the development of symptomatic counts of pathogenic bacteria. So the passengers are dispersed and not communicating with each other well before symptoms appear; when it is easier to finger the burger you had when you touched down or the ham-and-coliform sandwich you foolishly bought at the airport before leaving.

Should you be worried about getting sick from the water in the plane? Not at all: unless you are old, young, on immuno-suppressants after your transplant or HIV positive.
Posted by BobTheScientist at 07:10