Last Friday we had the annual Works Do in the canteen when the Management put up a slap up feed for the troops. It is officially to honour the previous year's crop of retirees with short trib from the relevant line-manager and the presentation of a clock to the ex-employee. Actually it's not useful like a clock but rather a monster glass vase engraved with the name of the perp. It was an opportunity to rehearse my accept-and-thanks speech for this time next year when the vase will have my name on it. I have 15 working weeks to go on The Institute gig.

I've spent a chunk of holiday time reading and giving feedback on the Literature Reviews of my [N = 8] final year project students. They are requested and required to get some background on their project topic by reading other men's flowers and summarising the state of play in 5,000 words. A cap of 5,000 words was put on the task a few years ago after some goon submitted a 50 page ramble. Clearly they hadn't heard If I Had More Time, I Would Have Written a Shorter Letter. This old saw has been laid at the pen of numerous wags including Blaise Pascal: Je n’ai fait celle-ci plus longue que parce que je n’ai pas eu le loisir de la faire plus courte. One of the commonest failings in these essays is woolly, rambling sentences that need to have their lapels-seized to have the sense shook out of them. The base is either a) failure to limit each sentence to a single idea b) qualifying each statement with hedging and officialese to make it look more thoughtful c) a certain amount of phatic waltzing around the subject matter because direct speaking can seem abrupt and abrupt can seem rude.

Here's an example, not the worst: The mammalian orders have long been demonstrating successful evolution for over 250 million years. Which I replaced with Mammals have been evolving and diversifying for 250m years: more information with only 60% of the letters! One of the reasons I am still on the planet is to try to instill more confidence and assertiveness in young scientists, esp young women-in-science. You've done some good work, I say, nobody knows this thing you've found out but you (and now me), you should tell it like it is without skating about pretending that it's not important. Part of the reason that science is top heavy with Patriarchs is that women present themselves and their work with more humility and skepticism than Joe Blowe-your-trumpet.

Whoa! Evidence for that last statement flagged by MeFi comments by Clawson and Mrs.Potato: in the Science Stakes, Male leads are 21% more likely than women to call their contribution ground-breaking, excellent, unique, wonderful [BMJ paper]. What's perhaps worse is that the rest of science buys the packaging and cites those positively framed papers 13% more than equivalent fem-papers. [Exec Summary Harvard Gazette].

It has been really fortunate [but you make your own luck!] that I've landed this Twilight Years job because it suits my demeanour and my tool kit. I coulda been a contender but not so much in top flight cutting-edge science. What I do, I do okay: I make it seem like fun, and funny, without losing sight of the serious. We have to dig a bit to uncover the truth without getting a hernia with too much heavy lifting. I like to think that I encourage my students to fulfill their potential . . . and a little bit more. The world, and Ireland Inc., is not short of genius but genius needs a Good Pair of Hands to implement the creative sparks of genius. Technical Hands trained in an Institute of Technology. 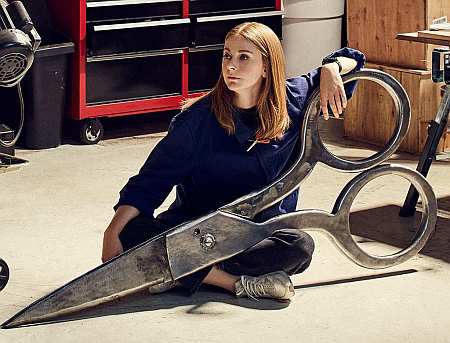 PhotoCred: Joe Pugliese
I'm reflecting on that equilibrium because Simone Giertz [above] Queen of the Shitty Robots <no longer> [prev] has a long piece to camera in Wired where she discourses on her latest high-end engineering projects: making electric pick-ups because she couldn't wait for Elon Musk to make one. The other item on her agenda was to quit being QotSR because she thought, that The Man thought, that she was (just) playing it for larfs and so not to be taken seriously. I won't be alone in thinking that she's wrong to put her Shitty Robot past in the dustbin of history. She's done more, with her crazy [wake-up call] ideas [soup robot] and dopey, hilariter implementations, to inspire young scientists, esp young women-in-science to give science a go. Not least because her best videos emphasise that it is okay to be wrong and that wrong is the first step towards right.

Nobody achieved nothing by not trying.
Posted by BobTheScientist at 07:16