In 1996, we were the first people in the county to install under-floor heating and the last people in the country to use red microbore ~8mm plastic piping. It was wonderful when the girls were small and a ton of kerosene could be had for £250. When the distribution manifold failed 19 years later, it turned out to be irreplaceable. For the last 4 years, accordingly, we've had oil-fired central heating upstairs and a number of options [sweaters, hot-water bottle, wood-burning stove, the oven, electric convection heaters] downstairs. When I came back from work in 2015 to find the hallway in flood, I called the nephew of the Family Plumber who came out immediately and sealed everything off. The Family Plumber was not available because he'd moved to Youghal which is 2 hours or 125km distant. I missed him, but his neffie was capable and efficient if a whole generation younger than us.

With family expected this Christmas, The Beloved asked the Neph-plumber if he could sort out a couple of not-emergencies: the water-pressure was a bit variable and the grit filter was a bit green. I don't think he replied, but he certainly didn't rock up to do the work. But our neighbours across the valley [highly] recommended a plumber /electrician / farmer from the next townland. 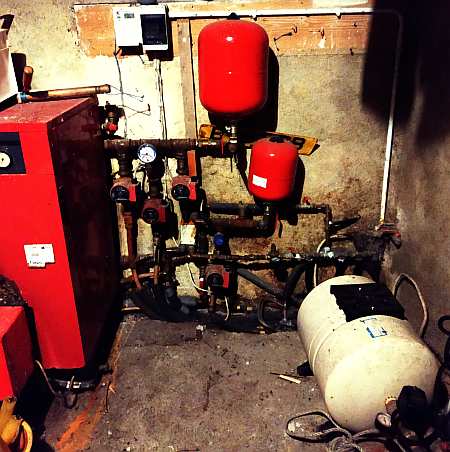 He, like all tradespeople, was super busy in the run up to the holiday but he offered to come out to scope our system. Like every plumber who's been on site, he marvelled at the complexity of the plumbing [Above: a tangle of gun-metal L-bends, two pressure cylinders, four pumps, 4 pressure gauges, 2 valves, seven stop-cocks] and and poor choice of materials [gun-metal, brass and copper that have a half-life in months when assaulted by our acid and corrosive water] for which the original plumber had billed us.A few years ago, the Family Plumber had actually disconnected two of the pumps as wholly redundant consumers of electricity. He'd also given me an imbecile's instruction-set for how to manage the system; but I know my limits and operate on a pretty strict if it ain't broke don't fix it policy.

New plumber's advice was that there were 70% grants available for replacing the apparatus that serviced private bore-holes [submersible pump; pressure cylinder (the big white lad on the right in the picture) and control-switches]. "You'll be at nothin' if you start to trick about with any of the things you want me to fix: you'll be looking a bill for parts of €200-€300 with labour on top. Go for the grant and you'll get a spanking new system for an extra €200". And that's what we agreed to do when things woken up again in County Hall in the New Year.

He hadn't been off the farm for an hour when I was told that the kitchen ceiling was weeping . . . just like it had when the copper pipes under the bathroom had failed one after the other and ultimately been all ripped out and replaced with Qualpex. The copper hot-water cylinder had failed first - I think the first one lasted 18 months; the second 15 months; and then we installed a stainless steel cylinder with a 30 year guarantee that cost twice as much but gave much less trouble. There was an ominous puddle on the boards under this super-cylinder which suggested that the cylinder had failed! Nooooo! Getting access to the cylinder required shifting about 100kg of towels, sheets and bathmats from the "airing cupboard". I phoned the plumber! And he talked me through isolating the hot-water cylinder to stop any more water getting into it and expressing skepticism that the stainless cylinder had been eaten through.

He was, of course, correct. His experience could work out the probabilities of various possible leak sources without having to be in the same room. Between his deep knowledge and string-puppet me doing his bidding, we worked out that the electric immersion heater was completely corroded away so that water was dribbling out through the electrical connexions poking out through the top of the cylinder. We knew the electric immersion heater was long gone - they are essentially long copper kettle elements - when the acid water eats through the outer casing it shorts out and trips the switch on that circuit. "Why did you leave a dead copper immersion heater in place - everyone knows that makes a hostage to fortune and is an accident waiting to happen". Well not everyone knows . . . I didn't know that, although it seems rational with 20/20 hindsight. And if everyone knows means every plumber knows then why did none of the half dozen plumbers whom we've employed over the last 24 years share this handy piece of information with us? Feckers!
Posted by BobTheScientist at 07:17