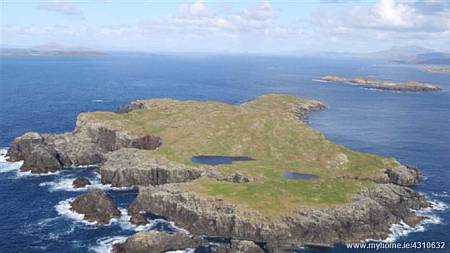 High Island, Co Galway - next stop Hy Brazil - [see above from above] is For Sale. A snip at €1,200,000! . . . if you don't mind bunking up with the Office of Public Works. Because ArdOileán is an antient monastic site and the OPW is often the vehicle by which our heritage and culture are protected from the ravages of commercial or personal convenience. 25 years ago, a farmer in Co Meath ploughed a little too deep and exposed the top of a subterranean passage tomb. Dismayed at the hassel of dealing with the Department of Antiquities, Heritage, Toothache and the Gaeltacht for the next decade, he borrowed a back-hoe from his neighbour and by tea-time had destroyed all traces of human hand except for a flat, ploughed and harrowed field. A loss to everyone . . . and to no-one and the whole incident disappeared from the press before the weekend - the All Ireland Final being much more newsworthy. 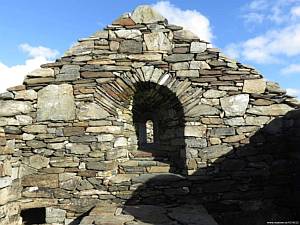 If you have a fantasy to own 35 ha. of defensible space against Brexit the Zombie Apocalypse, just be aware that the OPW knows where you live! - and won't allow you to practice lobbing mortar shells about; in case you disturb the layers of hidden heritage.You can see the inimitable, restorative hand of the OPW in the detail of the Gable end of Saint Féichín's chapel [see R] beside the lower of the two lakes. The also shows that, on at least one occasion since the beginning of colour photography, it wasn't raining on ArdOileán. The island is also a Special Protection Area under the EU Bird Directive because Barnacle Goose Branta leucopsis, Fulmar Fulmarus glacialis [prev] and Arctic Tern Sterna paradisaea are present and need their peace and quiet. And they'll grass you up to Birdwatch Ireland if you host an all night rave.

We're here getting damp in the windswept west because I was lent a copy of The Kick, the autobiography of  Richard "Battle of Augrim" Murphy [book reviewed as obituary]. He bought the island in 1969 (for a lot less than €1.2million!) because it was just down wind of Inishbofin where he was running a fishing, ferry and tourist business with a couple of Galway hookers. No, not those Galway Hookers, ye drunken galloot, the cargo boats after which the beer is named. Murphy was a romantic of the old style and lived quite self-consciously as A Poet, while friending a rattle-bag of other poets of whom the world has heard - Ted Hughes, Sylvia Plath, Ted Roethke, Seamus Heaney, T.S. Eliot, Philip Larkin. He bought a succession of wild, remote and lonely properties, often with someone else's money and usually made a good fist of bringing them back to use and life. Buying ArdOileán was a venture in that vein - he wanted to restore its place in the spiritual firmament. It was a wholly unsuitable place for people to live because it was really hard of access. Only 3km off the mainland coast, it is called High Island because it is surrounded by vertical cliffs with no quay, harbour or beach. You can only get a foot-hold at the base of the cliffs on flat-calm days which are as rare as Fulmar's teeth in Connemara.

Murphy was the castellan of this deserted island for nearly 30 years before selling it on when he extricated himself from his West of Ireland phase and moved nearer to Dublin. Although Killiney is hardly the city centre. He died a couple of years ago in Sri Lanka where he was developing a solid connexion with that country as it tore itself apart in internecine pogroms.

His poetry, like all poetry should be recited aloud rather than read on a page. Tony Kirby reads Moonshine. Or try a 60 minute RTE documentary about himself put together shortly before he died.

Other islands
Posted by BobTheScientist at 07:22