For the last year, for about half of each week, I've had to cater for myself - imagine that: a grown man having to cook and wash dishes. Collapse of stout patriarchy. But now in the 2019 Festive Season we are giving houseroom to four [4] members of the next generation who are mad-about-the-cooking and will strive with and against each other to get full use out of the mighty 5-burner 2-oven Rangemaster stove. Dau.II was first to arrive [21/Dec] from Cork having sacked The English Market for cheese and other delicatessen. She and The Beloved her mother stopped in Waterford's ArdKeen Stores for more food including a couple of ready to cook pies from Zanna Cookhouse in South Wexford. Just in case they were too tired from their cross-country road-trip to start cooking [for meeee] on arrival. 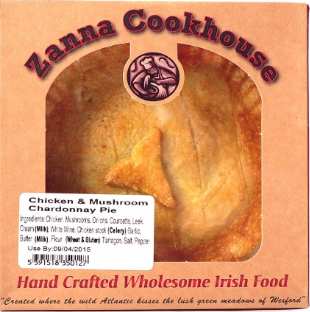 Zanna are working very hard from their Carnsore kitchen to supply demand for their products which are commendably free from emulsifiers, colours, preservatives and anti-oxidants. I know, because I've had occasion to collect a few hampers-of-goodness, that they cater for events large and small and cook as happily for vegans as for carnans. The cooks  in my gaff on the 21st were not super-greedy and agreed that one veg and one carn pie would serve the three of us: if bulked out with roast potatoes and stir-fry kale.
That accords perfick with Eat Food - Not too much - Mostly Plants. The pies were real nice although other eaters whinged they were a tad high on salt. But I think that's true of a lot of catered food. And Dr Pedant would prefer if there were no spelinge errurs in the Ingredient List and also in some of their promotional / instructional material: "remove all packaging except foil tray and place on a bking try". From the context, I am not going to place the packaging on a bicycling try but in the recycling bin. And the Food Ingredient Quantification Agency FIQA is going to be skeptical that there is more salt than flour in the Forest Mushroom Pie.
Q: What's a Forest Mushroom?, I asked those who had eaten some.
A: A selection of different mushrooms and not, or not all, regular Agaricus bisporus mushrooms which are the only species which normal Irish people eat.
But I'll bet that Zanna are not out scouring the forests of South Wexford gathering random or even selected fungi - the quality control would be just too edgy for anyone in the food trade.

Verdict: very nice but I bet I can make something nutritionally equivalent for a quarter of the price.  Not least because I've now acquired two nifty little aluminium foil pie dishes to re-use.
Posted by BobTheScientist at 08:05