Brother can you spare me a dime?

Beau Miles is my latest favorite youtuber: he mostly runs but here he be cashing in from the seats of the local public library: $5!! albeit Canadian $$.
This story gave me a frisson of empathy because, as a student in the 70s while The Beloved and Me paced back and round the streets of Dublin a-courting, I used to check the coin-return tray on all the public telephones we passes, frequently netting cash. Actually I probably didn't do anything like that while I was trying to impress herself but I was certainly doing that later on. When The Boy was small (but tall enough to reach!) I encouraged him to do the same when we lived in Boston. It often came up with payola for the kidder and incremented his meagre and irregular pocket-money. Around the same time, I implemented a more regular cash up and decided that we'd give him a dime = 10c per week for every year of his age. It started at 60c/wk in 1981 when a Hershey Bar [glarrk] was 25c.

For a few years, I used to call the young shaver into m'study on or about his birthday to discuss his increments and emoluments, as well as presenting him with an extra dime, I took him through <whooooosh way over head alert> the calculations for a cost of living increase. It was an inflationary economic universe back then and I'd announce that inflation had devalued his chinking-money by 3.4% over the previous year and so he would be getting 60 x 0.034 + 70 = 72c! The following year is was maybe cost-of-living increment = 72 x 0.029 + seniority increment (72 * 8/7). I hope you, as a numerate adult can follow this. And you're probably with now-Me in thinking this was an absurd quasi-VictorianDad conceit to sic on the chap. When we moved to England in 1983 he turned 8, and I just changed US$c into GB$p: I couldn't be bothered with introducing an exchange-rate increment to the formula. I was damnable for the youngster because he could hardly withdraw his labour and go on strike or seek a more lucrative gig with the folks who libed across the road at #36 . . . although he did date their daughter for a few weeks later. 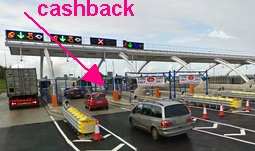 Which brings me up to date. We go back and forth between our mountainy home and the Waterford coast on a regular basis and one route-option is to by-pass Waterford City on the River Suir Toll Bridge. It costs an inconvenient €1.90 and I'm suir that many people throw €2 into the auto-toll bucket rather than waiting for 10c change from the tolleen. I am reluctant to lose 10c to a rapacious commercial operator so ask for change or, more usually engage forward-planning-drive and have exact change in my fist. But even if I lob a €2 into the robot toll basket, I can frequently get a discount by scooping out the returned-coin slot from when folk have failed to recover rejected coins. My correspondent M, another occasional user of the toll-bridge, are in a friendly competition to see who can make the most from a single pass. I think my €3.60 is currently top of the leader charts. It is defo not worth cruising back and forth through the toll-plaza for fun and profit but there is a 'found money' sense of jubilation quite out of proportion to the actual value.

The average American automobile is shredded with about $1.65 in change in it. My tiny Yaris, which barely has room for a sack of potatoes nevertheless ate a maritime coast book I was intending to pass on to my pal Russ. It slipped down and under the back seat and lurked there for several months earlier this year.
Posted by BobTheScientist at 07:33