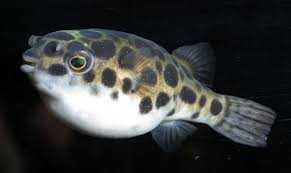 Eee happen, yeh learn something new every day.  Because it is a model organism and one of the first species to have all its DNA sequenced, I know a little about Takifugu rubripes or 虎河豚 the Japanese pufferfish. It's genome is pretty compact being about 10% of ours ~300 million DNA base pairs but having about the same number of protein coding genes. The other thing that Everybody Knows about fugu is that the Japanese eat it for the rush, in the same way that young chaps from Donegal drive cars far too fast and without seatbelts. I was told by a native last week that no-seatbelts is a thing up there. I'm told that fugu is just fishy when you discount the frisson of eating something that might kill you. Perhaps people of affect to believe that it is really special experience when fugu is eaten as sashimi are the same sort of poseurs who blow hard about vintages and terroir with the poor wine waiter in Irish restaurants. The mystique /pretention drives up the price to about $40USD/kg wholesale. 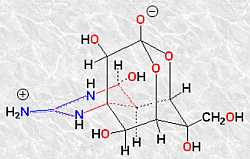 The toxic principle is fugu is called Tetrodotoxin TTX and it accumulates only in some of the internal organs - liver, ovaries, eyes, skin - of the fish. You'll be fine if you leave them on the side of the plate; except that TTX is really toxic in minutely small quantities - 10,000x more killing power than cyanide. If somebody has lain the fillet on the skin, for example, that foolish action might have transferred enough active poison to kill a customer. And how exactly does it kill you? TTX [structure R] is a reasonably simple molecule; in contrast to, say, Botox, which is a biggish protein. TTX prevents the operation on sodium channels which are essential for effective muscular activity. If you eat enough it will prevent the muscles of your diaphragm and ribs from sucking air into your lungs. The only remedy is to get attached to a ventilator for several hours until the toxin dissipates or gets broken down. Because the brain remains unaffected, you will be quite conscious as your lungs shut down and paramedics try to keep you going with CPR in the ambulance to hospital.

You have to wonder what the evolutionary advantage might be for Takifugu to produce and sequester this toxin. The standard answer depends on potential predators learning not to eat that sort of fish. Fugu also deters attack by blowing itself up to look less of a tasty appetiser and more like a choking hazard. Another possible advantage surfaced recently in a paper saying that TTX apparently helps reduce stress in juvenile Takifugu. WTF? How do you measure stress levels in a fish?? Like they measure it in mice and people: the boffins measure serum cortisol levels. In the recent paper they also looked for evidence for the amount of fin-biting that was going down in talks which get TTX in the diet and control tanks which don't. Seems that, instead of chewing their finger-nails like Christians, stressed fugu chew at their neighbour's fins.

Another obvious question is to ask why Fugu don't die from the incapacitation of their sodium channels? Well it turns out that a long time ago an ancestor of all the toxin containing species of the Tetraodontidae family was born with a single mutation in the gene for producing sodium channels. That mutation changes the structure of the channel enough so that the toxin can't do damage but not so much that the channel can't work. Damned clever that evolution, amazin' what can be done with a bit of change to the genes.

It never occurred to me to ask how TTX gets into the ovary and skin of Takifugu or what enzymes were necessary to fabricate the weird-shaped toxic molecule. With 20/20 hindsight, it's not in the least bit surprising that Takifugu does none of the heavy chemical lifting. That is rather done by Bacillus horikoshii one of several commensal bacteria which have the biochemical capability. Those bacteria are are really random selection of wholly unrelated microbes - Gram-positives, Gram-negatives Alcaligenes, Bacillus, Caulobacter, Enterococcus, Flavobacterium, and an alphabet soup of others. This is not the sort of complex system that you expect to evolve several times independently; so my current thought is that the gene-complex for making TTX must have been acquired by horizontal transfer. This is all super-intriguing: enough to fuel at least two possible final year research projects next year at The Institute.
Posted by BobTheScientist at 07:37