We waste about 1 million tonnes of edible material each year. This shame can be shared about equally 3-ways among producers, retailers and consumers. They call this €700 per household. But another estimate is to say 300,000,000 kg is not eaten by 4,500,000 people: that's over 1kg a week for every manwoman&child. Heck, I've just pitched 4 blue satsumas in the compost in the last two days because they started to turn within 36 hours of purchase. I really don't like to waste food - it's almost a religious thing. I'm not afraid of a touch of Penicillium on the last slice of bread, let alone a white bloom on the surface of cheese. Our EPA supports a rather pious help-site called StopFoodWaste. I find the rule of thumb is to cut off as much of the obvious damage as possible and either eat immediately OR throw the salvage into whatever is cooking on the stove.
Once you've got blooming food up to 100°C it's good for a few more days. Every time I throw anything in the compost, I resolve to review my bargains impulse-buys among the specials at LIDLDI. Mushrooms, even at 80c/kg, aren't going to last forever so I'd better have a plan for them; and the planet.

Despite the insanely low price of chocolate biscuits - about the same/kg as potatoes - I make 1kg of flapjacks at the least excuse:  meetings, funerals, weddings, works-dos, general consumption. They always make an acceptable gift because they are loaded with golden syrup and the oats, which make a third of the weight, fool people into thinking they are healthy. I have successfully made batches for vegans using sunflower oil instead of butter and honey instead of golden syrup, or both.

The other day The Beloved was going to spend the day with her Buddhist pals and asked for the recipe for flapjacks. I wrote butter 8 syrup 6 oats 12 flour 6 sugar 6 cinnamon shake on a scrap of paper. Supplementary question came back about whether vegan coconut oil would substitute for butter. I answered in the affirmative (what could go wrong?) and left the kitchen to chop water and haul wood in the yard. They looked golden brown great after 20 minutes but the slab had no strength and became granola before it could be cut. Turns out that TB went for bust on the coconut front and, as well as the coconut oil for butter substitute, used coconut 'flour' instead of wheat flour. There is a reason why we use wheat flour for bread, pastries, pancakes, biscuits, scones and wallpaper paste: the gluten forms long protein strings which hold the eggs, butter, currants, cherries together. Coconut flour is so much sand by comparison.

What to do with a bagful of coconut-oaty granola? Y' can't throw it out for the birds. I looked in the fridge to see how I might bring it back onto the menu. The answer lay in the prior existence of
. . . which I made into a coconoat cranberry bakewell tart: 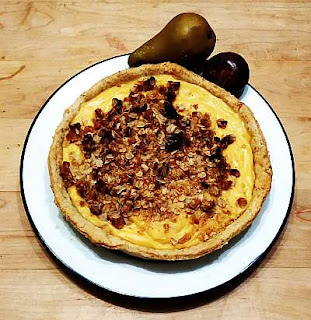 which was just as weird as it sounds - and looks. Still I'm training myself up on the what kills not fattens school of catering and over the course of a week ate the whole thing.

The family has Far more nutritious and tasty dishes.
Posted by BobTheScientist at 07:42