We're half-way (or more) through Library Ireland Week but I didn't realise it until a got an Info Bulletin from Wexford CoCo's PPN Public Participation Network. It doesn't say much for intra-family comms that I have a daughter in the Library Trade and I had to hear from strangers that there was a competition, with prizes, associated with the Week. They are asking for essays, tweets and whatever people to on Friendface on the subject of How Libraries Inspire. The best complection I can put on it is that Dau.I is angling for the prize herself and is seeking to nobble any competition from her father. The great thing about having a Blobarchive of 1.8 million words summarising my life and times is that I have an anecdote for peretty every occasion alreadt written and just needing parcelling up. For the Inspired by Libaries gig, I dug out an old Blob about scanning through books shelved in random order in a hunt for weekend reading. Bob of the Generous Hand is selflessly giving You a chance to win with your own sentimental story about turning a corner in your life because of an encounter with your local librarian.

I could, rather, have written about my recent discovery of Talking Books [100 Objects; Why We Sleep; Bill Bryson's Journeys in English], which have recently given me more direct control of what I get to hear in my 45±5 min daily commute from Home to The Institute. That might sound contrary to my hymn to the unexpected in the previous paragraph. But the content on Newstalk FM and RTE can get really rather predicable and, even if not, it's nice to have another option if both channels are interviewing the Minister of Corruption about just how uncorruptible his government colleagues are.  Bill Bryson's book is a) 20 years old b) commendably short at 6 half-hour episodes but I raced through it in a couple of day's driving. It came to an end, somewhat abruptly, halfway between Thomastown and Kilkenny as I buzzed up the M9 from Tramore on Wednesday morning. For unaccountable reasons, when the CD popped out, the wireless kicked in with Raidió na Gaeltachta RnaG, in particular a morning music show called Nead Na Fuiseoige [Lark's Nest] which had just started playing Ceap Do Shuaimhneas [Make your Peace]. 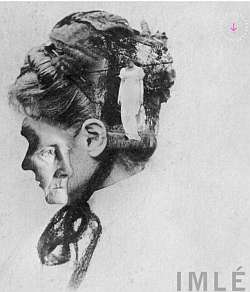 Ceap Do Shuaimhneas has a sort of reggae beat and bouncy tune which put me in an even better mood than I usually develop as I approach the working day at The Institute. Here it is on youtube; YMMV, but it was so good that I spent half-an-hour yesterday evening trying to track down a playlist Ceol ón gclár for the morning's programme; it must change each day, so you want to do your follow-ups sharpish. My Irish is utter crap, so I couldn't pick out two consecutive words to google up the source. Turns out the singers are Imlé who in turn are Fergal Moloney, punk poet Marcus MacConghail and rapper MC Muipéad with Bassist & Producer Cian MacCárthaigh. It's wonderful that there are authentic voices writing, singing and rapping in Irish and not being held back by or held in thrall to traditional diddley-idey fiddles, harps and bodhrans. Go Imlé!
Posted by BobTheScientist at 07:09