The Severn [354km] is the longest river in Great Britain and has much the same profile as the mighty Shannon [360km]. They both service a huge (for islands) catchment: 16,800sq.km for Shannon, 11,400sq.km for the Severn. But the flow-rate at the mouth of the Shannon ~200 cu.m/sec is nearly twice that of the Severn ~107cu.m/sec. Those rivers have been scouring their banks for thousands of years and once a section has caved in and been carried away in Winter floods it is gone forever. This has resulted in their widening estuaries which pose a formidable barrier to traffic. The cities of Limerick and Gloucester were founded and came to economic prominence as being the first point upstream from the raging ocean where the rivers could be crossed with reasonable safety. Initially there were fords but the local burghers, traders and travellers eventually got fed up with getting wet feet and built bridges.

But if you were heading for South Wales (or the Fishguard Ferry) it was a bit of a schlep to drive up river on pre-Motorway roads only to drive down-river again to continue your Westward journey. So, since antient tymes there was a ferry between Aust, Gloucs and Beachley, just in Gloucs but on the Welsh side of the river. For a long time the monks of Tintern Abbey were charged with maintaining the ferry service. Tintern Abbey, the inspiration of a poem by Wordsworth, was also the source of the Cistercian monks who populated Tintern Abbey in Wexford. The Aust ferry was famous for transporting Bob Dylan on his 1966 UK tour and I wrote about that last year. The economics of transport forced the Aust ferry out of business when the Severn Road Bridge was completed and competed on price from September 1966. 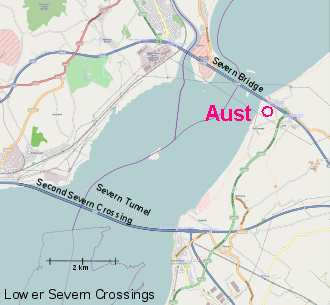 The economics of transport had also driven the creation of a marvel of 19thC railway engineering. In 1872, the Great Western Railway secured planning permission to construct the Severn Tunnel, designed by the GWR engineer John Hawkshaw to connect Bristol with Cardiff and England with Wales in a direct line. Work started in 1873 but the final brick was not laid and the tunnel opened for traffic until 1886. The main unexpected problem was the force of subterranean springs which burst through the tunnel-lining from below. Hawkshaw had a cunning plan for stopping salt water cascading in from the Bristol Channel above the tunnel but eventually brought the fresh-water springs under control with pumps.

The Severn Tunnel is like mine-workings in this sense. They require active maintenance to keep them from being inundated and once they are abandonned it is economically ruinous to recover them. In the 1950s and 1960s British Rail was entirely state-owned in the post-WWII socialist paradise that brought in the National Health, the National Coal Board, electricity, steel. 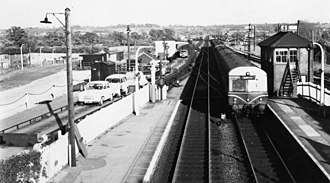 Although heavily subsidised by the tax-payer and susceptible to feather-bedding, these enterprises were encouraged to be enterprising and occasionally were enterprising. Someone had the bright idea of going head-to-head with the Aust ferry with MotorRail trains. These adapted flat-bed goods waggons to allow cars to drive on at Pilning and drive off on the other side of the river at Severn Junction. The passengers were required to leave their vehicles and travel in a carriage with the common people. It's different with the current Channel Tunnel between England and France where car-passengers sit in their cars forthe journey.