I guess it started in my mid-teens, the buying of books. That's when I got my first job, working at the nearest farmstead in the school holidays. I don't think I was a charity case but then again I wasn't the most useful hand on the farm. Riddling and bagging potatoes and sowing potato seed for the next round filled those Winter and Spring weeks and the money didn't fill my pockets. But at least it gave me some discretionary income. Later on I was paid substantially more for a lot less graft working as a hospital porter. I used to haunt a paperback bookshop near my school and if I had enough money would usually buy a [new] book  before I left. Later later on in America, I got the message that you didn't need to buy new books if any reading matter was grist to the intellectual mill. If you wanted the latest, you had to pay full whack but I knew at some level that there were more interesting books than I could possibly read in one lifetime . . . so it was fine to buy a yard-sale book at 50c or 25c rather than one untouched by human coliforms.

Indeed, once you get the bug, it is hard to go wrong if a book costs so little that it is cheaper than coal. In those Boston days, The boy was still a sub-teen and I started to pick up books that might be useful for his extra-curricular education: atlases, biographies, cookbooks, dictionaries, exploration, farming, geography . . . who knew what he would be interested when he grew up. We shipped hundreds and hundreds of books back to Europe in 1983. Once you get the bug, it's hard to stop and the acquisitions continued for the next 30 years.

But in the last couple of years, I've weaned myself off the need to own any [more] books. For a while the interweb made acquisition much easier but then
I was visiting my mother's house [and m'mother!] at the end of November. After a medical crisis, hospital and a patch-up in early September, she is no longer At Home but rather In a Home. Indeed the house is for sale and needs to be cleared. The apple falleth not far from the tree, and my teenage and later book-buying did not make me a sport or a freak in the family. My folks had acquired a lot of books. Even ten years ago, I would have been tempted to box up and bring away books on art, botany, churches, design, Egypt, food, gardening, history, iconography. But not anymore. I have my own book-clutter issues. 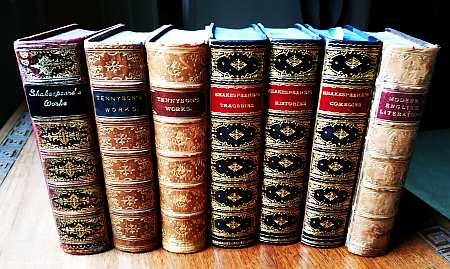 Nevertheless, I had a look at the fly-leaves of some of the 'fancy-looking' volumes [as above] after wondering why the parents would have two copies of Tennyson's Works. They turned out to be identical except for the binding. One was awarded to my Grand-Father Wilfred the Harbourmaster for excellence in French while at Portora Royal School, the protestant crammer [Denis Burkitt, Samuel Beckett and Oscar Wilde were pupils] in Enniskillen, the other was awarded 4 years later to Norah Craig, his future sister-in-law. The handsome three volume set of Shakespeare's Plays was awarded to Son of Harbourmaster me Da - again for excellence in French. La pomme tombe pas loin de l'arbre!

And lest you think tha academic success was only to be found in my paternal ancestors, the two flanking books Shakespeare's Works and Modern English Literature were won as form prizes by my mother's Limerick mother round about the time she was welcoming Louis Blériot after the first aerial crossing of La Manche. The only prize I won at school was The Junior Scripture Prize for knowing the Bible better than any of my peers.
Posted by BobTheScientist at 07:17