The human eye is A Machine when it comes to pattern recognition. Small children can 'pick the odd one out' even when they couldn't easily articulate what exactly was peculiar about That One. In factories where everything else had been given over to robots, the QC quality control position was still held by a human, partly because it was too complex to write code to explain what was wrong with dented cans, leaking cornflake packets or brown and squidgy potatoes. My first paying job was working on a farm in the school holidays; my first three week Christmas time stint we were riddling and bagging potatoes. In 1970, a 40 hectare farm could carry the gaffer, his family, two full-time farm-laborers and their families, as well as a part-time grunt like me. Riddling needed all three of us, one to shovel hundreds of tonnes of spuds into the hopper, one to operate the ON/OFF switch and do the QC; and one to flip the gate at the far end to fill the next bag, tie off the full one, load it onto the trailer, and jink back in time to repeat ad nauseam. Bagging was the worst task because of the relentless time pressure rather than the physical lifting. QC was easy: you had to fetch off any absurdly large tubers, anything squidgy of any colour, and any potato-sized stones. The earth, and the tiny tubers fell through the grids of the riddle like the Sieve of Eratosthenes and eventually went to feed a couple of enormous porkers. The immediate reward was that the big 'n' ugly [and hence unsaleable] spuds were divvied up among the workers at the end of each day as a tip.

The Boy shipped out to New Zealand just before his 30th bday because the NZ Government allowed young (less than 30 y.o. which is quite old: Alexander the Great had conquered the world by 30) people to go out there to work for a year. After walking the Milford Track, he headed up to Christchurch for Christmas dinner with some very distant rellies. In the New Year, he went down to the job centre and was delighted to land a billet at the local recycling centre. His visions of hugging trees and saving the planet were sorely dashed when he found out what he was expected to do. 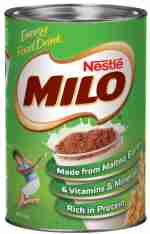 Every few minutes a truck would unload a batch of mixed dry recyclables into a hopper and the refuse was passed in front of him by a rattling conveyor belt. His task was to pick out certain items from the stream and chuck them in particular bins. It was far worse than me riddling potatoes, the belts were relentless and the work was flat-out. He couldn't believe that he had gone to the other side of the world to work in a sweat-shop for the minimum wage. "Fakk", he said, "I can't take this anymore, I won't come back after the dinner-break". As the morning hours crept by, this mantra changed to "Unless an empty tin of Milo comes by, I won't come back after the dinner-break". A few minutes later a mighty, industrial-sized tin of the malted milk drink passed before him, and he felt obliged to stay the full week working there. He spent the next 10 months working at the check-in counter for one of the local airlines - loved it.

Things have moved along since Christchurch, NZ 2006, let alone Berners Roding, UK 1970. For two reasons a) they've made machines that can handle the tedium and recognise the different types of packing b) The Man has reduced the definition of recyclable materials to a fraction of what we need to dispose of.  The Man has, indeed, issued a new set of diktats at the end of November 2017.  And many of these items must be pre-processed by the punter to become acceptable to the company that is lifting €500 a year per household for handling the waste. I could understand if Joe Public felt a little bit put upon. And that's supposing that Joe is fully on board with the principle and not drunk or hungover or mad at the the kids. For 40 years Ireland has been down with the bottle banks, for example, we've internalised that bottles are for recycling, but they cannot now be put in the recycling bin; not even carefully put in the recycling bin. You & I appreciate that those bottles get roughly handled and break after they leave home but maybe Joe doesn't. So
And you can't save space by stuffing a small dry recyclable inside a large dry recyclable - it makes work for the operatives who have to separate everything; although you can flatten out your 2 litre pop bottles . . . IF you've rinsed them first. I'm feeling hacked off already and I'm not even in the system. This year 160 Irish shipping containers of mixed dry recyclables bound for China were refused shipment at Rotterdam because they were fizzing. It's like the single blood donor with jaundice who infected 1500 women with HCV.


So I'm not the only one in the country who is too dense to understand or too pissed off with the arbitrary rules to never make a mistake with the bins. Pat the Salt lives right in the centre of town; the walk from the chip shop takes exactly the same time as it takes to consume a fatburger and chips. He is expected to take drunken people's refuse out of his green bin and put them in the land-fill bin.  One failure could contaminate an entire shipping container and then he'll be shipped off to China. To be frank, part of him thinks he's there already: a Chinese consortium is doing up the decrepit Grand Hotel across The Square and Pat has suggested that the PRC has install a cell of watchers with telescopes who monitor the shipping traffic in and out of Waterford Harbour.

So let's have some relaxing time watching stuff getting sorted by robots and give thanks that we don't have to do it by hand:
Did I say Happy New Year? No?
Athbhliain faoi Mhaise Daoibh
Posted by BobTheScientist at 07:41