My Grandfather was harbourmaster of Dunmore East in Co Waterford from the foundation of the [Free] State until he retired in 1947. That year my own father, his son, turned 30. Insofar as the younger man had a home, I guess it was Dunmore until he married in 1950. The woman he married, my aged mother, has recently turned in her cards as a self-catering, autonomous 99 y.o. and signed heraself into A Home about 5km from the village where she lived since 1983. It took a medical crisis and a trip to hospital than made everyone realise how exhausting it had been to cook and clean for herself being registered blind and increasingly wobbly. Dau.II and I did a Thelma and Louise a couple of weeks ago to help tidy up the house for sale.  We turned up a little framed photograph with broken glass in a desk drawer and I brought it away for rescue and restoration: 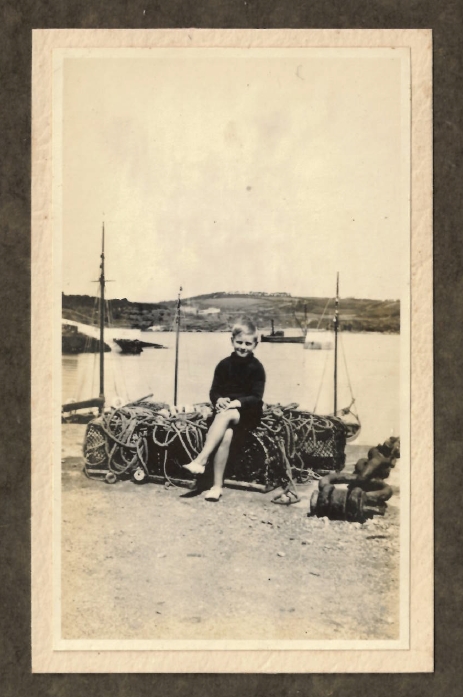 The little cutey is my father, aged 10ish in ?1927? He is sitting on the quayside in Dunmore not looking the least bit proprietal because his father was The Gaffer. It reminds me of The Boyhood of Raleigh, without the ruffs: 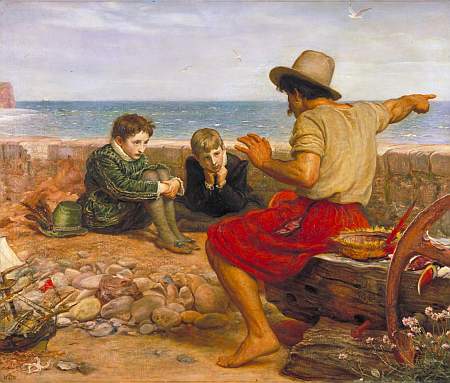 And less you think that my Old Man was a passive poser for pictures, I also came across this seascape: 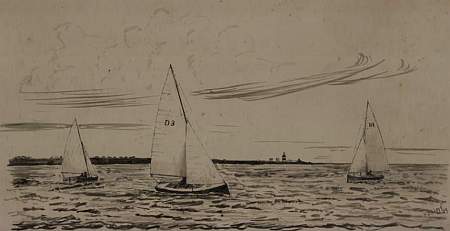 That was painted by my father in the Summer of 1939, just before the Scheiße trifft den Fan with WWII. The good ship D3 in the forescape is one of a class modified from a design by famous naval architect Uffa Fox and built by my grandfather, I guess with help from his son when the latter wasn't at school in Co Down or Dartmouth or sailing the main. I've always been a little in awe of my grandfather, who knew me aged 2 but not vice versa, because he died the following year in 1957. He lived a riotously adventurous life and definitely could sew on a button. On the striking coincidence front, I had just returned from England when the man who occupied my father's bed in his capacity as son of the subsequent harbourmaster of Dunmore East sent me this clipping from The Munster Express 12 Jan 1940: 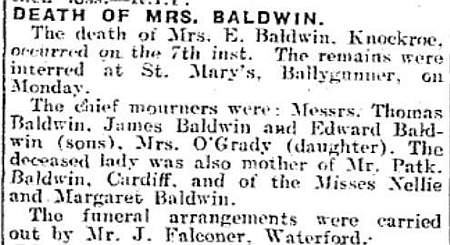 The principal in that obituary is the great-grandmother of The Beloved and Mr Patk Baldwin-Cardiff is Pat the Salt's father. When The Beloved and I met in 1973, we were a long way from our roots in East Waterford. Indeed it was weeks before we realised that there was any kind of connexion.
Posted by BobTheScientist at 07:30