On Sunday I was down with Pat the Salt. clearing out the fridge for dinner. A week ago The Boy had shipped me a case of a selection of beers from The Beer Club, Ireland's on-line off-licence. These have been sitting in said case waiting for a special occasion.  As I left home on Sunday, I took a blind sample from the box to fortify me for an evening watching the telly.  It was a bottle of Galway Hooker Amber Lager and very nice too after a couple of hours in the fridge. It's interesting from a couple of aspects.

1) One is the paucity of ingredients: water, barley malt, wheat malt, hops, yeast. Although much less than sou'wester cake [N > 40] and sausages [N=16] it's rather extravagant compared to the German Reinheitsgebot [prev] of 1516 which allowed only Wasser Gerste Hopfen [Gerste is barley not yeast auf Deutsch]. Presumably the yeast fell from the ceiling of the old breweries or the hands of the brewers. The bold ingredients in the Galway Hooker listing are allergy triggers, of course; for the psychocoeliacs and the real ones.
2) The label breaks into European periodically / randomly: Sisältää ohramallasta-innehåller kornmalt = "contains barley malt" in two languages FI and SE. And then mindst holdbar til: se flaskenhals which is DK for 'best before: see bottle-neck'. Why those languages? and why not consistently one or all? 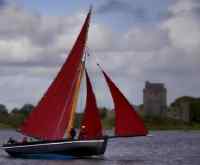 I was on a roll with Google translate so thought I'd put Galway Hooker into Irish for a title to this post. That delivered Gaillimh fraochún and I thought I'd better do a reciprocal best hit analysis which revealed that fraochún is a whore; hooker being slang for the same profession. I know that prostitutes used to hang out near Spanish Arch near the Galway docks but that's not the hooker meant by the independent brewery: as you can see from the top of the label [R above]. It is rather the robust class of red-sailed, gaff-rigged, single-masted shallow-draft fishing vessel [example L] that used to be the standard working sea-boat around and across Galway Bay.  And can someone tell in the comments what, if any, connexion there might be between fraochán [bilberries Vaccinium myrtillus prev] and fraochún ?  It turns out that fraoch is the Irish for common heather or ling Calluna vulgaris. Must be the same in Scot's Gaelic because Norrrth o' the borrrderr, you can but a bottle of Fraoch Heather Ale. But, be warned, it's a bit madey-uppy when it comes to the ingredients: Water, Malted Barley, Malted Wheat, Heather, Bogmyrtle, Hops, Ginger, Yeast. Ginger? Holy legless boozers, is it Enid Blyton's Five Get Drunk on Ginger Beer we have here?

Do you want a damn-fool band-width consumer to show you how beer is brewed? Try Galway Hooker's click and watch an amber bar move about a schematic pipeline.
Posted by BobTheScientist at 06:37