A Dot Plot [example R]is: a) the antidote to Harry "Winner-takes-all" Potterism b) a simple, simply great data-visualisation tool c) something I've learned since I started in The Institute by being required to teach it. I've used it before to compare racing dogs and Indian languages; so there really is no end to its uses. The backstory here is that the whole (3-generation, 4 county, 2 country) family were at home the last w/e in August. When that happens at least one Irish Fry Up is obligatory: with rashers and eggs; tea and toast. No fried bread, more's the pity, because we're not Welsh but a choice of white pudding to compensate. Both puddings, De Roiste and Clonakilty, originated in Co. Cork. I won't regale bore you with the ingredients because Cookie sliced through the packaging to get the pudding rounds into the pan expeditiously. Some suggested doing a taste test [rating each brabdbecause we had a sample of N = 7 people with opinions. The puddings were distinctively different but nobody felt they were living their best life from the plate in front of them. 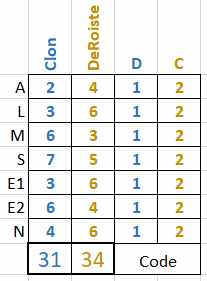 The slips of voting papers were gathered and totted up by Gdau.I who at 7+ is numerate enough to do this in her head. I can remember being her age and stymied by having to add two multi-digit numbers that were not on squared paper.  With sufficient panache for the Eurovision, she announced the result "And the winner is . . . Clonakilty".  Whoa! I said, not so fast me hearties, you cannot claim that Pudim de Clon is better than the other unless it has a significantly higher score. Give me that data.  I stomped off to my lap-top and everyone else started to talk about truly great white puddings which could be obtained in far distant locations; like Cork's Engish Market. There may be a different way of doing this but I plot each set of scores against dummy variables, here 1 or 2; and then use the scatter-plot function of ExCel. I've tweaked the duplicate scores to separate them on the graph, which appears at the top of this piece. That should make it clear that the data is all variance and no mean; or at least any difference in the average (or Total, same thing), is swamped out by the wide range of consumer preference.  Another fall out from such an analysis is that you can begin to score the people who are scoring the white pudding: Punter A is a miserable old curmudgeon who thinks both choices are crappy [where's my fried bread?]; Punter S otoh has generally a more sunny and optimistic outlook.

If you care about the distribution of data - and you should - dot-plots are just bonzer.