Irish as handicap.
Back in 2015 I wrote about how understanding human physiology is much harder if you're learning all those new words - trzustka; ciśnienie krwi; nadnercze - [pancreas; blood-pressure; adrenal to you monoglots] in a foreign language. I give thanks daily that I was born and raised in a country where the local tongue was the same as that used globally for aviation, science and engineering. Else my tin ear would have posed a significant handicap to my scientific career. Being born white, male and middle-class-patriarch helped too. 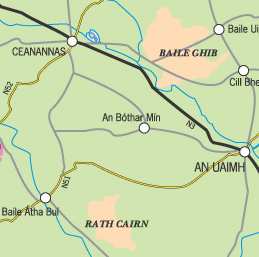 At the beginning of last week I encountered a young chap raised in the wholly artificial aspirational gaeltacht of Meath which consists of two small villages, Ráth Chairn and Baile Ghib, between Kells [Ceanannas] and Navan [An Uaimh]. If the gaeilgeoirs were an endangered species of bower-bird in New Guinea the conservationists would have insisted on joining them with a habit corridor to discourage isolation and [inevitable in small-small populations: those accidents will happen] extinction. Although the English-speaking denizens of Bohermeen might have objected to having all their signage in Irish. The chap was well impressed that I knew of the existence of Ireland's least known gaeltacht, because most people think he's a spoofer when he claims to come from the Ghaeltacht na Mí.  Because the Irish Language is entangled with the political identity of this our Republic; and because most kids think compulsory Irish in school is a travesty and a penance; the government gives bonus points if you sit state exams in the country's first language. Those extra points may be the difference between getting into Med School or having a [really productive] career in Human Genetics, Medical Device Technology, or Physiotherapy.  You wouldn't think it was a handicap.

On Friday, I met another céad teanga native Irish speaker in my remedial math class at The Institute. He was really struggling, not only in the maths class but also in chemistry, physics and biology because the words were different. He knew all about the dreaded plána claonta but was mildly foxed when the lecturer preferred to talk about inclined plane; although that's one of the easier [plána = plane] simultaneous translation tasks he faced into every day. It's like as if he was doing his biology degree in Warsawa or Groningen. Actually, as I discovered at last year's Higher Options, at both those places you can do a 4 year degree through English, the universal language of aviation, science and engineering. I set my maths class on some self-directed, instant-feedback exercises on Powers2 and logarithms. With some anxiety, I checked in with my fear óg about how he was doing. Oh this is numbers he said I've go no problem with numbers: a haon a dó a trí. The problem is of mathsemantics - when language meets maths.
Posted by BobTheScientist at 07:40