Toki pona - a way of life 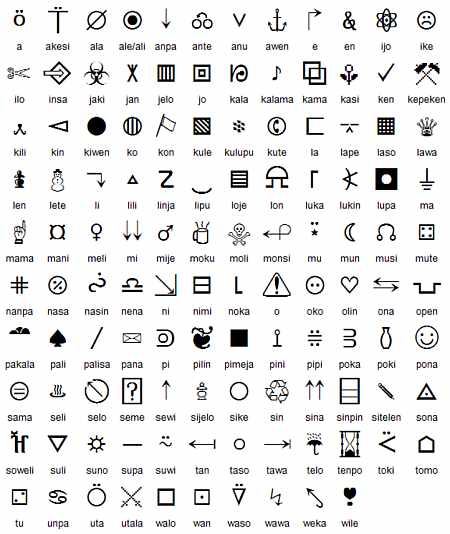 What you see above is the entire vocabulary 123 words of Toki Pona a ConLang - Constructed [=madey-uppy] Language like Esperanto [prev] or Interglossa [prev] or GoT's Dothraki. It was invented by a Canadian linguist and translator now known as Sonja Lang and previously as Sonja Elen Kisa. Toki Pona means good talk in Toki Pona and that 'pona' particle is indeed laden with value. It is A Good Thing to have a Reduced Instruction Set RIS vocabulary because it forces users to be careful in their choice of words.  Right Speech is, after all, one of the Buddhist precepts on the Noble Eightfold Path. 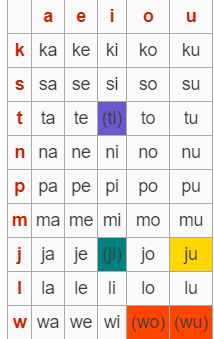 Another important simplification is a minimal set of vowel and consonants [source for L] and no diphthongs [iou, io, oi] or consonant clusters [nt ght, nstr] which make it hard for ordinary folk to spell and pronounce: think Aoife or Aimhirghin to non-Irish speakers. And no tones which can cause much faux-pas merriment at foreigners in China. Because Toki Pona wants to be used by people from all cultures and all linguistic backgrounds.  I have held a torch up for Globish the simplified English, so that people from Hong Kong or Malaysia can read The Institute's prospectus without having a dictionary at their elbow.  As you know we have 21 consonants in English and lot more that 5 spoken vowels but some of these are rather difficult for foreigners to get right. And Anglophones are useless at the trilled r in Frrrançais or the ch in Loch Lomond. And failure to correctly clear your throat when asking for a train-ticket to Scheveningen could be a death sentence in WWII.

Math heads might think that an artificial language starting with 50 syllables [shown L] could start with 50 x 50 = 2500 two syllable words but that would be a) too fat a vocabulary b) too controllinh altogether. The actual 123 words are chosen to resemble elements of [several] natural languages. Toki [v.] talk, to communicate, say, speak, say, use language, think in a nice hat-tip to Tok Pisin pidgin-english spoken all over New Guinea. Pona [Adj.] good, positive, useful; friendly, peaceful; simple like Latin Bona, French Bon. The graphic at the head is only a little help with meaning. Meaning is designed to be, if not ambiguous, at least sensitive to context.
I'm not sure but I imagine and hope that Toki Pona folks are descriptivists not prescriptivists. There are many ways to skin a cat. If you forget the word for a fork in Ulaan Baatar you can ask the waiter for the eating tool with spikes. We can manage with only five colours pimeja walo  loje jelo laso . If magenta, turquoise, burnt ochre really matter you'll find a way to communicate with your arty pals. Those limitations are central to the language's philosophy - what do you mean, exactly, by crimson? Was Homer colour-blind with his wine-dark οίνοπα seas? Simple is less ambiguous.
Posted by BobTheScientist at 07:14