In 1977, the FDA issued a diktat that women of child-bearing age should be excluded from drug trials. You can, maybe, see where they were coming from. If one of the cases or controls in a trial fell pregnant, then what you do? At the least you'd have one less data-point, or a hostage to fortune if you ignored the developing foetus. And all those hormonal fluctuations, they'd make the statistical analysis a bit awkward. And the Patriarchy would, on some level, believe that women were essentially the same as men. Blokes with a uterus, like. So the findings in the drug trial would be applicable to everyone XX  and XY.  Women became invisible in the development and testing of drugs. Which is really weird because we've known for years that women's disease profile is quite different from that of the male partners and contemporaries. 80% of clinical cases of auto-immune diseases occur in women for starters: the sex-bias most pronounced for Sjögren's syndrome, Graves disease and SLE. otoh, men are much more likely to acquire a cancer especially in the larynx, oesophagus, bladder and lung. Some of that might be due to higher rates of smoking men  . . . but men are also more susceptible to viruses (because their immune system is a bit damper than in women) and there is increasing evidence that many cancers are triggered by viral infections. The female immune system is fizzier and so it more likely to go off the deep end and start destroying the myelin sheath of nerves in multiple sclerosis, for example.

And it's not only viral infections that are higher in blokes:  they are more likely to get TB, malaria, Schistosomiasis, Leishmania, Toxocara and other nematode infections. Presumably all stemming from their dozier immune response to these debilitating and potential fatal diseases.

Finally there is the evidence for vaccine response. Antibody response is greater in females for all the childhood andf teenage vaccines currently on the market except Tdap (tetanus, diphtheria, and pertussis). And in all cases where adverse reactions have been noted for a vaccine, these are more common in girls. 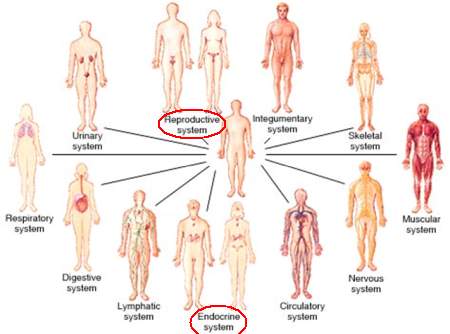 These differences are in the air because of a recent paper in Science [paywalled try SciHub] out of the Whitehead Institute at MIT and a 2016 paper Sex differences in immune responses in Nature Reviews Immunology. It made me look at the introductory slides of my Human Physiology course with fresh eyes. In the graphic [above] of the various biological systems I intend to cover this year the two sexes are only differentiated for Reproductive [it's the uterus, silly] and Endocrine [that pesky progesterone] systems. Osteoporosis is waaaay more common in women than men and those male cancers affect all the other systems; but not enough to upset the fundamental assumption portrayed in the diagram that men and women are essentially the same.

And the weaker sex? Surely men! We start off conceiving an substantial excess of male embryos [maybe 130 : 100] and this is whittled down to 105 : 100 at birth. The scything continues through childhood as boys succumb to fatal coughs and infections [and really dopey self-destructive risk-taking; especially when the adolescent brain cranks up between 15 and 25] to even out the ratio around the age of 30. Women out-number men in all subsequent cohorts. With women outnumbering men 5 to 1 among centenarians.
Posted by BobTheScientist at 07:39