I was born on an island off the coast of Europe and grew up speaking, almost exclusively, English.  What a privilege: speaking English like a native, like being born with external plumbing and untanned skin, has made life really easy for me. I often wonder how far I would have gone in Science if I'd first gone to school in Poznan or Porto or Potsdam, rather than Portsmouth. With my tin ear, I probably wouldn't have been fluent in English like my workmates in the zoo in Rotterdam. Europe is crammed with people all yakking away in their native languages: 50 countries, 740 million people, 10 million sq.km.  The EU (incl for the moment the UK) is home to 510 million people in about 4.4 million sq.km. There are 24 official languages within the EU and I'll come back to them later.

India, then World's largest democracy, covers about 3/4 the area [3.3 million sq.km] but has more than twice as many citizens [1.3 billion (and rising)] as the EU. There are currently 22 languages on the Eighth Schedule to the Constitution of India. Here they are alphabetically: Assamese; Bengali; Bodo; Dogri; Gujarati; Hindi; Kannada; Kashmiri; Konkani; Maithili; Malayalam; Manipuri; Marathi; Nepali; Odia; Punjabi; Sanskrit; Santali; Sindhi; Tamil; Telugu; Urdu.  Don't know about you but I could only have named a handful of these and even with the list would have difficulty writing them ordered by the number of native speakers. But I would have been quite sure that it would be, like Eclipse, Hindi first, the rest nowhere. And I'd be right: 44% of Indians speak Hindi as a first language 5x more than Bengali, Telugu and Marathi the next highest contenders.

I was reflecting on this because, in my restless surfing of the interweb, I came across the Jnanpith Award, India's Premier literary prize. It has been awarded annually since 1965, sometimes shared when the committee appointed by the Bharatiya Jnanpith cannot agree. The BJ is a literary think tank endowed in 1944 to carry out research into India's dead languages: Sanskrit, Prakrit, Pali and Apabhramsha. The Jnanpith Award, is given to an author who has written something in an Eighth Schedule language, or in English and is worth ₹11 lakh = 1.1 million rupees. That's 'only' worth about $20K USDs, but a lakh goes a long way on the sub-conitinent. The JA is thus like the Nobel Prize for Literature, the Man-Booker Prize or our own Bord Gáis Energy Irish Book Awards. Richard Flanagan (and others) has been scathing about the concept and execution of these events: "Literary prizes exist to give dog shows a good name . . . National prizes are often a barometer of bourgeois bad taste." Success as a writer is chaotic - as in 'sensitive to initial conditions' - Two writers, both alike in dignity, in fair India, where we lay our scene . . . have very different career trajectories if one (and it can only be one) wins a LitFest Prize.

So I thought, I'd have a look at the data of the Jnanpith Award to see if there was evidence of skull-duggery. There could be two sorts of error: one language could be garnering too many prizes or minority languages aren't getting their day in the glare of publicity. The JA committee are compelled to give weight to the Buggins Turn - if a Malayalam writer wins one year, his/her co-linguists are excluded for the next two years. There is a suspicion that Rudyard Kipling won his Nobel because no English-language writer had won in the first seven years of the Nobel Prize for Literature. 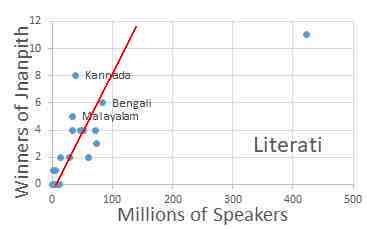 I think it's clear from that plot that you're at a significant disadvantage if you choose to write in Hindi, the lonely dot in the top right-hand corner. Demographics indicate that Hindi should win 44% of the 57 so far JAs but they've only landed 12. 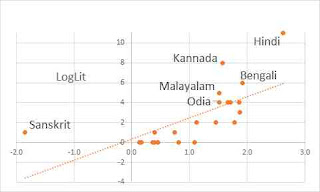 The huge disparity in the number of native speakers [from 400 million speaking Hindi to 14,000 priests, scholars, dilettantes and the long-dead speaking Sanskrit] cries out for a logarithmic plot for the population.  This suggests that Sanskrit [I winner Satya Vrat Shastri who shared the 2006 award] and Kannada [8 winners] are punching above their weight. If you really want to win a JA in the future, you should learn, and start writing sonnets in, Bodo or Manipuri both of which a) have less than 2 million speakers b) have never won a JA.
I should add that, in a separate analysis, I have also incorporated data from The Moortidevi Award another Lit and Phil Prize given out annually by the lads from Bharatiya Jnanpith. But adding another 29 datums doesn't begin to address the stochastic effects and most of the minority languages remain un-prized. My advice: stick to Bodo, it's the language of the future: looks easy enough.
Posted by BobTheScientist at 07:34