We spent St Patrick's weekend at home; and, although Mohammed stayed away, 50 years of strong smart women sat down to Sunday dinner up the mountain: The Beloved in the Matriarch's chair, Dau.I and her SO, Dau.II, Dau.II's odd-mother, o-m's daughter. I won't bore you with the ages but the range was 50+ years. The youngest person present is beginning to run and the adult women present were full of cogent advice and encouragement. Someone cited Chris McDougall's Born to Run [bloboprev] because in the elite ultramarathon world, women are at least as good as the men. If you can run 100km, then your chromosome count [and consequent testosterone titre] is no handicap. I can run 100m, uphill if necessary, but I cannot speak at the end of it and I have neither the wind, nor the bottle, to run 1km let alone 100km. otoh, I did walk 700km in 1989 and 800km in 2004, so I have [blistered] skin in the game. Me I'd cite Feet in the Clouds: a tale of fell running and obsession by Richard Askwith as a source of inspiration for young runners.

My preferred charity is the RNLI because a) it does good but b) it allows people to be their very best = heroic. Running also allows people to be their best selves: against self; in competition but also in compassion and kindness. Marathons and a fortiori ultramarathons really sort the sheep from the goats. I've recently become a bit of a sofa-groupie for dog-sled racing like the Iditarod Race which is not a direct commemoration of the famous diphtheria antitoxin delivery to Nome, Alaska in 1925. The race happens every year since 1973 and takes at least 8 days to cover 1500 km through a winter wilderness by a sled and dog-team. This year the third person across the line was Jessie Rover. Susan Butcher won rhe race outright four times in the last century, while Libby Reynolds was first home to Nome in 1985. That was a dreadful weather year and Reynolds took 18 days to cover the course. This year a lot of attention has been on rookie Blair Braverman who finished 36th and six whole days behind the winners. While she was mushing on through the blizzards, her fan-base were raising $000$ of dollars  #uglydogs to support Alaskan schools. Commentary at MeFi.

BB was one of 17 (about a third) female entrants in 2019, including Jessie Royer. It has got to be harder graft to finish 36th after such an extended and calorie sapping journey than in the top three.. Anyway, our youngest visitor over the weekend is mad-about-the-dogs having acquired a puppy  a few weeks ago to walk and clean up after. It occurs to me that if Jamaica can field bobsled teams, both men and women, Ireland can surely furnish an entrant to the Iditarod in about 10 years time.

[You can stop reading right now unless you are fully nerded up]
Scoping out the results of this years gig, I noticed that one of the variables was Dogs In with numbers from N = 6 to N = 13. Hmmmm, I pondered, is the number of  Dogs In correlated with the time taken and/or is there an optimal number of dogs for getting over the line in the quickest time? That required cut&pasting the data from the results page in Excel and plotting Dogs In vs the time in seconds. 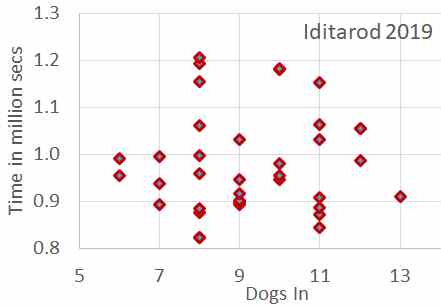 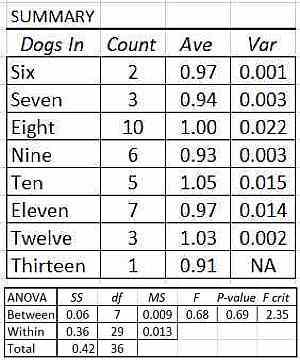 This picture is a special class of scatter-plot called a dot-plot where the range of values for each count of dogs is graphically displayed. This shows [me] that the range of race-times for a particular number of dogs is greater than any difference in the average time among dog-numbers. The display is far more important, and provides better insight into the distribution of the data than any ANOVA [analysis of variance] the standard statistical test for such data. The intuitive feel that here within group variance trumps mean values is actually borne out by the ANOVA. It takes about 1 million seconds or 11 and a half days to run the race regardless of the number of Dogs In. I'm not sure exactly what Dogs In signifies: are substitutions allowed during the race the way soccer players are ordered off the pitch by the coach and replaced by a player less puffed or less limpy?  Regardless of the details, I'll be using these data in Quant.Meths next year at The Institute to show the value of dot-plots.