We went on a date, The Beloved and I, on Saturday night at Highbank Orchard in Cuffesgrange across the county borrrder in Kilkenny. Rod and Julie Calder-Potts the current generation of the family, diversified into apples (from mainly hops Humulus lupulus) 50 years ago and their journey has been to add value to the product rather than have margins cut to the bone by wholesalers and the big supermarkets. Saturday's gig Bia Beag Irish Bread from Irish Grains [link] was the 4th go at an occasional foodie symposium. I could have sacked out on the sofa or better (because it was a gorgeous sunny Autumn evening) pottered in the polytunnel watering tomatoes and picking beans; but I'm really glad I was dragged out to meet some bakers . . . and millers . . . and growers. And not to forget the all important consumers . . . of fine, robust, varied and super-tasty bread. Joe Fitzmaurice, baker from Cloughjordan Eco Village, made this point several times: there is no value in making, baking and pushing the frontiers with sourdough bread unless you are feeding people with the stuff.  I think we all agreed that the feedees had to be plural: sourdough bread should be broken with others. It is the central ritual in Christianity for a reason although nowadays reduced to a non-sustaining token wafer to free the rich from the idea, the obligation, that the poor also must eat.

The other theme for the night was the inter-dependence of growers, millers and bakers [and eaters, of course]. The number of varieties of commercial bread wheat has collapsed precipitously over the last 100 years. Especially since the rise and artificial rise of the Chorleywood Process [prev] since 1961.  80% of British and Irish bread is made in vast factories using this industrial process to make millions of 800g sliced pans every day. Only certain limited varieties of wheat need apply for a place in that process. That limited genetic variation wheat could be wiped out by a new virus [think Cavendish bananas] and may be shook by climate change. We need variety as a hedge against an uncertain future. 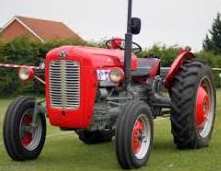 The current agri-business model is low margins, high inputs and fantastical levels of debt. To up the yields farmers have to a) lurry on the fertilisers and pesticides b) get bigger acreage for economies of scale. A BIG tractor is required because an MF35 [R example for sale in Harare] wouldn't cut it <putter putter putter> no matter how long the day. Today's tractor costs as much [€150K+] as a house; how is a young farmer going to start into business with land at €25K/ha and that kit-debt to pay off?  Well a not-so-young farmer food-producer, Bruce Darrell also from Cloughjordan is living one sort of answer. You may have seen him on the RED Gardens channel on youtube - growing wheat for example. Most years he produces about 4 tonnes of food which is more than he and family can eat so he puts the surplus out in a shed with an honesty box and his neighbours help themselves.

A more scaled up farmer (and miller; you have to diversify) is Emma Clutterbuck from Oak Forest Mills Co. Kilkenny. They broke out of the standard agribiz model several years ago to grow lower yield but added-value grains such as einkorn, spelt, heritage wheat, naked barley. These all pose challenges for farmers, being more weather-sensitive, harder to handle and much less uniform than 'commercial' wheat. Most grain grown in Ireland is destined for animal feed and you can get a much higher tonnage from that than growing bread wheat. The profit is all from yield because their is no, or very little, premium for quality. Emma has been remarkably adventurous in thinking outside the box to imagine new ways of bringing food to the Irish table. Their mill, imported from Austria like my scythe, was a cunning plan to take back control of quality as well as to add value. Stone-milling is easier on the grain and keeps the oily wheatgerm better intact to yield a product with longer storage and better baking quals.

Next up on his feet was Rob Mosse the fifth generation scion of the milling Mosse family, Quakers of Bennetsbridge and millers on River Nore since time began. Nicholas Mosse the potter is a collateral relative. In 1963, when Rob's grandfather started milling, he was jockeying against 50-80 working mills in the Republic. When Rob took over the reins in 2004 only 7 were left and two of the three Odlum's mills were sold out of tyhe sector within a few months. Milling, following the economies-of-scale certainties of global capitalism, has all been shipped to England. A frisson of concern was raised about Irish food security in a post-Brexit world. Rob's core business is a robust wholemeal for Irish soda bread. Soda bread is a chemical reaction between sodium bicarbonate NaHCO3 and a long way from the slow ferment and protein and vitamin development you get with overnight sourdough fermentation. But brown soda has the virtue of being dense with microbiome sustaining partly digestable long-chain carbohydrates.  He also grows and sources Ölandsvete originally from Denmark and purple winter wheat which have much higher protein levels and tastes of something. 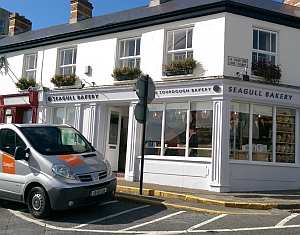 Mosse is in a synergistic relationship with Sarah Richards, proprietor of the Seagull [arán seagal is rye-bread] bakery [L with mis-parked tsssk! van] just down the street from Pat the Salt in Tramore Co Waterford. She is also an engaged experimentalist doing whatever it takes to make bread from a wide diversity of flours. She has the McDonalds uniformity problem to deal with - her best paying regular customers want the same [borrrring!] loaf as they had last week. And consumer watch-dogs require some uniformity in weight, hydration and protein content. We'd all be a lot better off if we trusted the baker to make the best fist she can of a variable product - every loaf is different but every loaf is good - a variable diet is after all good for gut flora diversity and frankly makes life more interesting.

And finally, I got me some rye-flour sourdough starter from Joe Fitzmaurice; he brought a bucket full. The word on Foodie Street is that rye Secale cereale is the best food for a robust sourdough culture. I'm going to have to take an extra day over the bread cycle. Half-and-half: rye motherlode & wheat flour + water mixed and jostled together overnight and use that to make the next batch of bread. The rye starter might get confused and overwhelmed by being dumped into an alien sea of wheat. Rye starter lives for weeks and weeks in a fridge, they say. Mine gets sour and tetchy if it is left for a week.
Posted by BobTheScientist at 07:14