Book Review
The Salt Path
Optional background: Don't Give Up
Peter Gabriel & Paula Cole
Ray and Moth were /are like us, with similar off-centre aspirations: to find and run their own gaff and see what it was like to live a more immediate life: where the hens laid eggs just in time for the children's tea. They weren't interested in making sensible contributions to their pension as a hedge against an uncertain future in old age and infirmity. That's one way to progress; although reg'lar people wouldn't see much 'progress'.  Accumulating a fat pension pot usually goes with a high octane life-style: climbing the corporate ladder because the increments seemed necessary to support the stuff that you need to spend money on. Sometimes you can only get ahead by having the kit [suit, car, shoes, the right sunglasses] that shows you deserve it.

Anyway, Ray and Moth made their bed and lay in it and had two children and a small holding with sheep and chickens and a few paying-guests in the restored barn. It was hard work, living remote in Wales, but that's what they wanted. Somewhere along the way they invested some cash in a business venture of one of Moth's oldest friends. The business failed and the legal small-print said that Ray and Moth would, not only lose all the money they invested, but were jointly and severally liable for all the debts of failed company. After wasting a further three years of life and all their remaining money on lawyers; their home, their farm, their B&B business, everything was all repossessed by the Corporate Patriarchy and they were thrown out on the road with nothing but a peculiar tax-credit / windfall / pension of £48 /week. 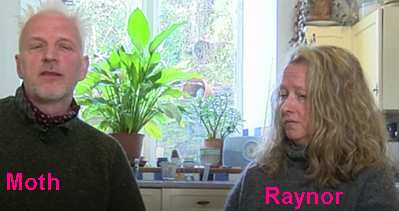 That same week Moth was given a name - corticobasal degeneration CBD - to attach to a peculiar set of neurological conditions which had been dogging his active life. Imagine a toxic melange of motor neurone disease ALS, Parkinson's PD and multiple sclerosis MS. CBD, as the second word implies, gets worse as time goes on; the connexions between brain, nerves and muscles get progressively more wonk until sepsis or pneumonia finishes you off because the lungs can't clear themselves. It takes 7 ± 2 years from first presentation to final curtain. Ray and Moth go into denial, as you do when you get a terminal diagnosis. But also because it is now 6+ years since first symptoms and Moth is a long way from being dead.
Could it be something else? they ask.
I am the Consultant! the Consultant replies.
He can't be much more use because CBD is incurable but he give Moth a script for Lyrica / Pregabalin, which we have met before. Pregabalin, (and the alternate treatment for CBD Clonazepam) gives a boost to GABA γ-amino butyric acid, the most well known inhibitory neurotransmitter. But extra GABA will bring a truly frightening array of side-effects [full list] including tremors, vertigo, dry mouth, constipation, vomiting, flatulence, erectile dysfunction, fatigue, peripheral oedema, abnormal walking. That shows you some of the task list for GABA around the body - one of the great multitaskers. It also shows what a blunt instrument oral pharmaceuticals are.  It's like killing a woodlouse with a shot-gun: you may kill the woodlouse but there is a lot of collateral damage to innocent bystanders. On a human level, those symptoms don't give the best launch to a 1000km back-packing camping trip in SW England. But that's what Ray impulsively decides they must do, and soon. The next Summer, as soon as they gather their traps, they start off on the South West Coastal Path from Minehead to Poole and every tide in between: 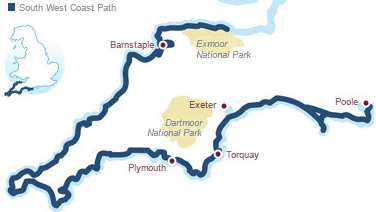 Vertigo for the cliffs; flatulence and vomiting for inside the tent; oedema in the legs for the walking; erectile dysfunction & fatigue for their intimate relations; tremors for taking notes on the wildlife; and constipation for holding a really crap hand dealt by fate. Neither of them is young any more and their progress, certainly to begin with, is painfully slow and, well, painful. With limited resources [except in bottle!], they inch along the map in their SWCP guidebook. It is a long time between showers, and they would rather eat than use a laundrette because their money won't stretch to both.

It's an interest apolitical political book. It exposes government delusions about the state of homelessness in England: wilfully undercounting those who cannot afford to put a roof over their heads in post-Thatcher Britain. This selective blindness allows The Man and the comfortable middle-classes to believe that all homeless people are druggies and alkies whom nobody can help. Several times in the book it is made clear that dogs especially my dogs are privileged over dispossessed people. More worryingly othering the homeless allows a yobbier, younger jugend to urinate on people curled up in shop doorways because they are untermensch. The standard reaction to homeless people is to shrink away from them or give them a sandwich - because money would only go towards the next bottle of Thunderbird [BBC's take]. My research reveals SocksAndChocs which supplies that sort of thing to the homeless. As Peter McVerry explained to us two years ago, the very best thing you can do for The Down is to recognise them: eye-contact, a greeting, a comment on the weather . . . like you'd do for the bus-driver or the check-out lady. There are people who refuse water - which falls from the skies, after all - to Ray and Moth when asked for it. It won't surprise you to hear that Moth is in the habit of giving his last few coins to someone who patently needs it more than he does.
Q. How do water-refusniks sleep at night?
A. Just fine because their cold-sore is much more distressing than His stigmata.
The Salt Path was a Sunday Times bestseller: you may hope that people come for the escapism of this week's travel book and stay to look at their own reactions to those insufficiently fortunate to be able to buy a £7 book. Indeed the cost of the book is almost exactly the same as Ray and Moth had budgetted each day for ALL their needs. I reflect often on the fact that I am comfortable, sitting on my own sofa in a reasonably warm, dry house simply from the accident of being born in the 1950s. We could buy a home in England in 1986 for £21,000 when my annual salary was £16,000 = ratio 1.3x. 30 years later Dau.II is looking at a home/income ratio of about 15x. It is iniquitous!

The other arresting sub-plot in the Salt Road is that Moth and Ray realise that they've left his spare vial of Pregabalin meds on the garage floor by mistake when packing their bare essential kit. Without the  medicine which the consultant is sure is the only thing between Moth and perdition, Moth begins to make a miraculous recovery. From being barely able to walk and in constant pain, he limbers up and recovers his libido enough to have some beachy bouncy bouncy with a delighted Ray. They surmise that it must be the oxygen as well as allowing his neurotransmitter to return to a more potent equilibrium.

On the very last day of their walk, a positive encounter with a random stranger lands them a place to live within commuting distance of Plymouth where the miraculously revitalised Moth has enrolled for college. In that flat Ray knuckles down to write her book which is its own small miracle. Those of us who have been transformed by pilgrimage are not richer or more sucessful but have shed a few certainties - and probably a few kilos - along the way. Ray gets to appreciate that Home is a state of mind more than a roof of slate.

Here's a fair-enough executive summary of The Salt Road and its back-story. Penguin's inner view with Raynor Winn.
Posted by BobTheScientist at 07:16