I suspect that, if you're reading The Blob, you're probably skeptical about the existence of The Illuminati. I mean, if you were planning to take over the world would you front your organisation with Beyoncé LadyGaga & Rihanna? he asked with a rhetorical flourish. Sing it!??  Sure, would it not be better to throw in your lot with one of the smartest mathematicians on the planet and one of the weasliest, most painstaking and planet-brained lawyers in Britain?

Eeee but we do love a disaster. In my report to head office at The Institute about my recruiting visit to the RDS last Friday I mentioned in passing that I'd seen the aftermath of an affray. The only responses I had from my colleagues were enquiries about the punch-up . . . not about the prospects of having any uninjured students signing up for our courses next September. There has been a fair bit of perverse fascination with watching the political train-wreck across the water. The interest seems to tap into the same darkness that relished public hangings . . . now sublimated into reading gristly Swedish policiers. The UK Supreme Court found yesterday that the UK Prime Minister was wrong in law to close parliament for five weeks when the most momentous political change of the century was trundling <choo-choo> relentlessly towards Brexit Day on 31st October.

For the momentous announcement, the Chair of the Supreme court, Baroness Hale, chose to wear an enormous silver brooch representing a stylised spider.The last person we encountered sporting this eccentric symbol of deceit, patience, femininity and strength, was Cédric Villani, Fields Medallist, iconoclast and almost always the smartest boy in the room. Brenda Hale has, since she was at Cambridge in the 1960s, usually been the smartest girl in the room. What could be clearer, my people? Look: 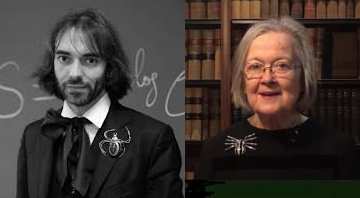 You'd better dust off your Spiderman costume. When They come for the unbelievers, you want to be sure They know you are on the side of reason.
Posted by BobTheScientist at 07:23