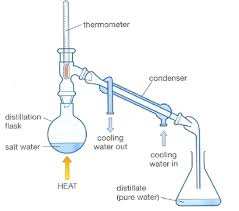 I was at The Ploughing, like I said. When I wasn't coursing over the site looking for freebies, I was standing by the Science desk trying to look intelligent and engaging. The material available could have been better thought through; but that would have required me to put more effort into the process than I felt able for. The most interesting part, for me and lots of our visitors, was a few bits of chemical glassware and a heap of barley kernels on top of a whiskey barrel. It wasn't working but most of the parts for a distillation set-up were connected in more or less the right order [more or less as R]. I therefore started on this patter that the key thing on the table was the barrrrley Hordeum vulgare, recently harvested from a field in Co Wexford. You should taste one, I said, you'll find it chewy. I also invited them to taste a much darker kernel that had been malted to convert the starch to a sweeter mix of sugar and protein and then toasted like a rice-krispie. Most people said it smelled and tasted like coffee and one 10 y.o. chap's eyes started watering much to the amusement of his elder brothers. That is a key ingredient in the bitter flavour and colour of Guinness and other stouts - an acquired, adult, taste.

Malting is the process of soaking the bone-dry barley overnight, shaking off the surplus water and allowing germination to start. After a few days, depending on the temperature - which rises as all this metabolic activity goes on - the Master Maltster decides that enough is enough and 'kilns' the temperature up to kill the barley seeds and stop the conversion of starch into sugar. The malt is then cooked up in water to release all the soluble sugars, cooled down to room temperature ready to have some yeast added.  The yeast converts each molecule of sugar into two molecules of ethanol / alcohol and two molecules of CO2.

C6H12O6 → 2 C2H5OH + 2 CO2
The same process is used in making both beer and bread, the former for the alcohol, the latter for the bubbles of CO2 which rises the bread.

At The Ploughing I tried to encourage all the teenage chaps I encountered to brew their own beer. It is an excellent training in science. Especially when you graduate from making 25 lt from a kit [tin of malt extract R, water and yeast costs about 50c/lt] and start to mix potions and additives in experiments. I started that caper when I was about 16 and bottles it into ginger ale and tonic bottles of which there was a supply from my parents' G&T culture. There was one non-fatal communication breakdown between me and the parents over this. They went away for a holiday and my mother brought a bottle of ginger ale from the cupboard to dilute the duty-free brandy to make a horse's neck. Usually pretty good but here Blehhhhhh! My golden home-brew lager was not the expected complement to the cognac.

The young of today are awash with money - happy to take taxis and buy take-away pizza - so I was making quite heavy weather on persuading them to make a big saving on the bevvies. All you need, I said, is a 25lt bucket in the corner of the kitchen, the home-brew tin, which comes with a sachet of yeast. The planet is awash with plastic water bottles to syphon off the finished brew. Just make sure you put a sign on the lid of your bucket "do not urinate in here" to prevent the drunken flat-mates from doing something regrettable.