D'ye have nostalgia for Nostalgia Chick? That's Lindsay Ellis [recently in the Misogyny Wars] who used to review movies when Dau.I and Dau.II were teenagers. There's one timeless hilarious deconstruction of Labyrinth in which young Lindsay riffs continuously on David Bowie's package [distant zoom R]. You'll never make sense of Labyrinth's PG rating again! A lot of stand-up <geddit?> comedians of the old school got some mileage out of the size of men's genitals. I guess it's easy to laugh about down there matters because it would be hard <fnarr> to take such an absurd conglomeration of plumbing seriously. Des Bishop called his package a crinkled turkey gizzard to make light of the seriousness of testicular cancer. I don't ever remember being in a state of mind which thought that size matters. Although in checking the back-catalogue, I see that John Tyler Bonner died a year ago more that an decade after publishing his book Why Size Matters From Bacteria to Blue Whales.

I don't know about Bonner, but other evolutionary biologists, notably Mark Maslin have reflected on the comparative anatomy aspects of primate genitalia. It's a theme in evolutionary biology since Georges Cuvier's quip "À la vue d'un os, d'un seul morceau d'os, je reconnais et reconstruis la partie de l'ensemble dont il provient" [give me a fragment of bone and I can reconstruct the entire animal]. From certain peculiarities of anatomy you can infer a lot about the life-style - diet, behaviour, inter-personal relations - of the species. Canines for carnivores, flat molars for grinding hay. Sexual dimorphism [usually blokes bigger than women] strongly suggests a bit of polygamy. Although nobody to my knowledge has come up with an explanation of why men have proportionately bigger feet than women - it cannot be all the better for playing soccer with. Humans are defo sexually dimorphic but the size differential is nowhere as extreme as with gorillas so the consensus is that the human default position is girls on top more or less monogamous with a good bit on the side.
Here's a picture from Mark Maslin zooming in, not on the feet, but the package. 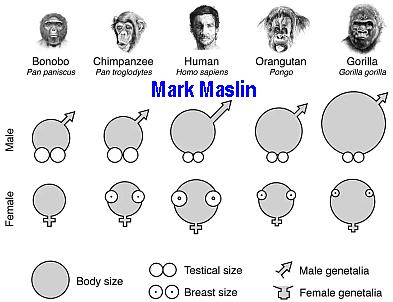 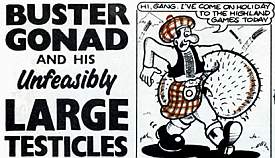 Proportionate to our size men have by far the biggest penis of among the great apes. But chimpanzees (both species) are really Buster Gonad [R] with their  unfeasibly large testicles - that's because they spend an enormous amount of the time bumping their uglies and so need a factory and warehouse for supply to meet demand. Men, not so much; indeed a couple of couplings will deplete the precious bodily fluids to zero and it will take a day or two to replenish. Remember the exhausted Rustico? If you're trying for a baby, it's probably a good idea to a) switch to boxers b) no wastage! 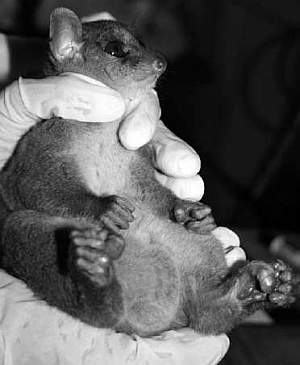 But if you limit your comparisons to the Great Apes, you're really not among the Big Boys. Eva Johanna Rode‐Margono led a team in 2015 which found the largest primate testicles in proportion to body weight in the scrotum of Mirza zaza [putting it all out there L]the northern giant mouse lemur found in a tiny isolated forest fragment of Madagascar. The species was only discovered and Latin-named in 2005. The team from Bristol Zoo capture-recaptured 5 male mouse lemurs and applied the calipers to their nads. The average volume was 3.9 cc. For a creature that weighs in a trifle under 300g; that's 1.3% of body weight. <TMI alert> I just measured my unfeasibly normal-sized testicles at wid 35mm x len 55mm </TMI> and applied that to the formula used by EJR-M [1/6 * π * w * w * l] to come up with a testis volume of 35 cc - call it 10x the size of Mirza's balls. But, at 70kg, I weigh 200x more than the biggest male mouse lemur. Matt Walker calculates that, for parity of esteem, we'd need Buster gonads the size of grapefruits,  That's more or less true but its based on a miscalculation of a misreading of the original paper; from which I attach an excerpt of Table 3:

Walker conjures up a testis volume of 15.48cc from thin air [from Table 3 the median volume is ~4,000cu.mm = 4 cc]. He then shows that he doesn't do the shopping: "Or put another way, if a man weighing 80 kilogrammes had testicles of an equivalent size to the lemur, they would be as large as a decent size grapefruit and weigh 4 kilogrammes". In my wildest tropical dreams I've never found a 4kg grapefruit. A 1kg grapefruit [same as a bag of sugar] is more like it. When you read make-it-accessible statistics on the BBC make sure you polish your crap-detector!