I did get a PhD, I had to Go America and work really hard for it. I didn't get to have such sustained joy-of-work until I started The Blob working at The Institute 34 years later. But it was quite weird because although I rocked up to Boston University Biology Department at least five days a week for classes and seminars and number crunching my boss would come in about 5 days a year. Working from home? Everyone is doing that now. In the 1980s it was peculiar. The gaffer worked from home at least partly because it was difficult to channel his several interests into a M-F 9-5 regularity. He was into cats, genetics, cat genetics, population genetics, anthropology, history, numismatics and genealogy. Often one of my chores in BU was to throw his outgoing mail into the Departmental mail-box to save a few dollars on stamps. Ah thrift, my sorta guy.

I was happy-out in that milieu; my very expensive education had coursed over a lot of those areas. And it wouldn't be surprising for conversation to flit from conquistadors to cats to Cardiff to cysticercosis. The genealogy could be a bit of a sleeper for me, because at that age, I wasn't much interested in my own forebears let alone other people's. But I remember one story of a couple of New England families whose stories were intertwined with births and weddings and funerals for 200 years and then abruptly ceased, despite the fact that they hailed from neighboring Massachusetts towns. It was a puzzle until Neil was driving through the area and realised that the two townships were separated by a wide tidal estuary. The bridge joining the two communities was carried away in a winter storm; it was too much faff to go courting by skiff and so the families went on divergent paths until the Eisenhower Interstate system replaced the road bridge 100+ years later.

This was all brought from the roiling deeps of my "mind" when I saw this picture [it's here just north of Edenville MI]: 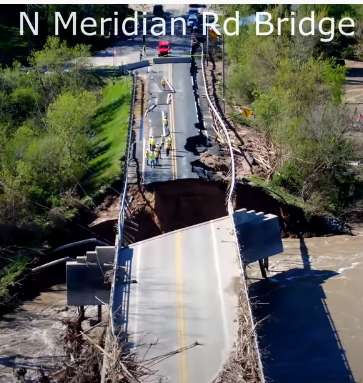 It's from drone footage from Edenville, MI where a domino of dam failures on the Tittabawassee River has been caused by a "500 Year Flood" in central Michigan. Here's the moment when the saturated earth of the Edenville dam finally bursts, slumps and allows water through. The mighty works of man look rather pathetic in the face of Mother Nature in a pet. For me the hubris is exactly captured by the concrete revetments, designed to keep the river-bank footings of the bridge from being washed away in a flood. ferro-concrete is strong: it has held together long enough for the concrete walls to be caught suspended uselessly from the road-bed rather than supporting it. You can see a) that the road surface and upstream [L] piers are loaded with snagged trees and debris b) because its usual path was blocked with crud, the river (now subsiding) went through the riverbank for a shortcut and caused 10m of road slab to drop into the torrent c) a clatter of hi-vizzed county engineers on the shore side of the chasm trying to make a plan for the immediate and longer term future.

Debbie and Randall, who live on opposite sides of the N Meridian Rd bridge and were dating will be doing a helluva lot of driving to keep in touch . . . even after covid19 blows away. The W Curtis Road bridge just downstream is still walkable but the approach road on the West has been erased; and replaced by a scour of mud. A lot of folks are now homeless downstream of the failed dams: like the former owners of this house which floated off to seek its best life in another, more salubrious, downstream, location. The dams have been placed across the river at considerable expense to win a list of benefits for the local people [the local wildlife not having much of a vote in the matter, although the Feds have tried to protect it]:
This is all grand until it isn't. A 500 year storm is a lot of water all reaching the river over a few hours and then heading off down the incline to Lake Huron. On Tuesday 19th May there was a dump of 60-70 mm of rain in 24 hours. That is a little less than 10% of the annual rainfall; and it all needs to go somewhere. A dam will catch this up-blip of down-pour and dissipate the flood over the next several days or weeks.
Q. And the water behind the dam, which will have been accumulating at least over the preceding winter; say a years worth of rainfall?
A. That will all come down at once, in a rush, making Tuesday's deluge look like a tinkle in a piss-pot.

I learned a lot about the consequences of dams, hydro-electric, corner-cutting on maintenance, cost-cutting on inspections from the Oroville Dam saga in Feb and March 2017 The best commentator for that saga was Juan Browne at Blancolirio. He's got something to show and tell about the mess on the Tittabawassee River.

If it was my home sailing off to the Great Lakes, I'd have some serious questions to put to Boyce Hydro Power, LLC who have been making money from power-stations installed in the failed dams. But the Michigan Department of Environment, Great Lakes, and Energy (EGLE) will have a case to answer because they recently required the retention of more water . . . to protect the pearl mussels. The Federal Energy Regulatory Authority has been requesting and requiring safety changes for years. [bickerfest reports]. I guess I'd leave my scrutiny of policy and procedures at Dow Chemical until all the fish die and/or the tumors have started to occlude my gut. Dow Chemical, which is headquartered in Midland, confirmed in a statement earlier in the day that flood waters were "commingling with on-site containment ponds.".
Posted by BobTheScientist at 07:29