Science is A way of knowing, so it doesn't have all the answers. If you're not at the very pin of your collar trying to survive [food, clear water, shelter] it's only human to want to exercise your mind on what's it all about? Science, and scientists, want a big spoonful of humility if they characterise Arts Block research as kinda useless because it doesn't achieve anything "useful". My years of research in synonymous codon usage SCU wasn't more useful than tracing the evolution of Chaucerian manuscripts . . . until SCU was found to be key to making more insulin and later where SARS-CoV2 came from. Let us, accordingly, give a small hat-tip to art historians, like me niecie, as they try to understand their finite universe. How big is that universe world [none of them have Art data from Mars]? Fermi Problem!! There are 55,000 museums in the World. The Louvre has 35,000 'works of art' on display [and at least as many in the cellars?]. The National Gallery of Ireland a mid-range gallery has about 3,000 paintings in its inventory. The Victoria Art Gallery in Bath has about 1,000. I'll bet you €5 that, within a factor of 10x, there are 50 million paintings available to scholars in the field. That's a lot, and nobody aspires to internalise all that data, so Art Historians specialise to focus on a subset of the global inventory [Op Art, Breugal 'n' pals, Icons of Андре́й Рублёв, Les Fauves, Mannerists, Cubists, PreRaphaelites . . .]. Here's a couple: 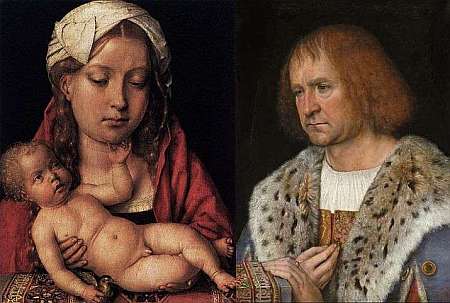 One question you might ask is Couple? Because I've stuck them together as a panorama.jpg despite the fact that the Madonna is now in Gemäldegalerie, Berlin while the contemplative bloke is now 6,700 km West in the National Gallery of Art, Washington.

Dude on the right is Don Diego de Guevara, a magnate in the Court of Burgundy in the late 1400s who ended his career as Chamberlain to Carlos V, the Holy Roman Emperor who made lithping a Cathtillian linguistic convention [prev]. Don Diego was a great collector of Art and this portrait was painted by Master Michel Sittow aka Melchior Alemán aka Mychel Flamenco (although he was just passing through Germany and Flanders having been born in Estonia). Sittow was a court painter and friend of Don Diego. Actually, "we" are not completely certain that the DC art is the same piece as one painted 503 (!) years ago in Burgundy. We require the labour of Art Historians to work that out by tracking fragmentary records through testaments, bills of sale and inventories scattered through the libraries, palaces and stately homes of Europe. 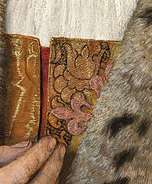 One of these scholars notice that a) Don Diego's portrait is exactly the same size as the Madonna from Berlin [bigger pic] b) the carpet on the plinth in each picture has the same design! It's like one of those spot-the-difference puzzles you get in the Kid's Section of the Sunday papers: the divil is in the detail. Who she? History is not written by, for or about women, but she is surely a real woman painted from life rather than an idealised version of femininity. The dates are right that it could (even) be Katherine of Aragon the future wife of England's Henry VIII. If that's the case, the child is defo not hers, but presumably borrowed from one of the women downstairs. The bird clutched by the boy is claimed to be a goldfinch Carduelis carduelis but I don't buy it. Certainly not a male goldfinch, they are really distinctive and have a black cap. In my experience, this week, with my own eyes, goldfinches eat the seeds of dandelions. They swallow the seed and the fluffy bits fall out the side of the mouth. Later in the season they switch to thistle-down and so there is a metaphorical association of the bird with the Crown of Thorns. My twitcher pals Dave and Des have scotched the goldfinch ID. "maybe a siskin?  Carduelis Spinus" Paintings are often richly allegorical: full of puzzles put there to add meaning . . . and pose a challenge to the artist's pals and patrons? Art historians love fossicking through this sort of stuff to identify sitters from the heraldic paraphernalia that clutters the corners of the picture.