Turn and turn about

On the 17th April after a week of no rain, we had a yard sale [above] . . . nobody came . . .  so we put it all back in the same shed. That might strike tidy uncluttered people as an exercise in futility, and I'd have to half agree. At least everything got an airing and we are slightly more confident [no hiding place] that the mouse which had been sharing the sheep muesli wasn't there any more. We also managed to set aside a car load of electronic trash: computer monitors, Aldi web-cams, a casette recorder.  Just as soon as the Bring Centre re-opens we'll get that shite off site. I was amazed to [re]discover a large boxful of commercial DVDs. There was phase in my life, after I discovered play.com and was in full time employment, when I'd internet order films which I though would edutain our home-ed self-educating daughters. I wouldn't go mad about this but for several years, every bday or holiday someone in the family would get a film. That box had haemorrhaged my bank account of at least €500. Heck n jiminy, sometimes we'd watch films several times, so that was better value. 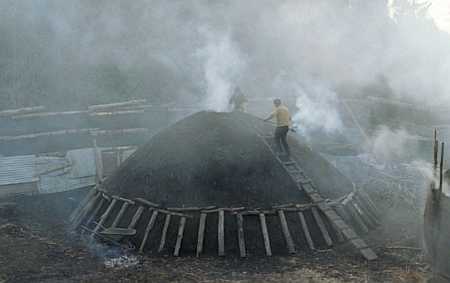 In any case, I had a nostalgic riffle through the box of boxes and came across Le Quattro Volte [2010 written and directed by Michelangelo Frammartino] which I was pretty certain I'd never seen and couldn't remember buying. It might be called 84 minutes of deep; some critics have called it Slow Cinema. It's the kind of thing that gets shown at the Blackstairs "subtitles obligatory" Film Society [multiprev]. The film starts with an obscured view of a charcoal business [above] which with hindsight sets up one of the key themes of the film. After that there is a several minutes sweep across an impossibly romantic Calabrian landscape following an elderly and lonely goatherd high on a hill through his daily round. At the end of the day the old boy delivers a bucket of milk to the village church where he exchanges it for an envelope of church dust-sweepings.
Grazie he says
Prego, the sacristan replies
At that point, I have a panic because no subtitles appear with the voices. Stop the movie, search the options and settings for subtitles - English for pref. There .  are .  no .  subtitles! Worse things have happened to me in a cinema and with some trepidation I watched on. Well, those two words were the only dialog in the film, so subtitles schmubtitles.

The critics say it is an investigation of metempsychosis which requires us to accept that, after the old shepherd dies in his bed, he is reborn as parti-coloured billy-kid. We follow the lonely life of said kid - lonely because the little creature gets lost in the woods. The herd of goats [with or without the lost one] is taken over by a younger, fitter, fatter goat-herd . . . and the inconsequential normality of rural life continues: there are no gunfights and no car chases. Another Volte! 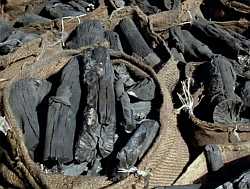 At the end of the Patron Day's festivities the tree trunk is brought down, sawed into convenient lengths and taken away . . . by the charcoal burners! Quattro Volte! Yes yes four turns makes a full circle, we are back where we started and the charcoal is for sale by the sack [R] around the town. Without the charcoal there would be no pasta carbonara and life as we imagine it in deepest Calabria would come to a creaking halt, The critics say there is a conscious tribute by the writer-director to weirding philosophy of Pythagoras; who lived and died hereabouts 2,500 years ago. But that must be nonsense because everbode kno Pythagoras was all about the broad beans Vicia faba and they don't get a sniff of a mention through the whole film. We can all find 84 minutes of idle time to fill during Coronarama: you should give Quattro Volte a go [it's on youtube] and it's been reviewed in the Grauniad.