We've always been a little bit End-of-Days millennial. I didn't really believe that Y2K would cause my tumble-drier to start talking binary at me. Nevertheless I dropped in a hardware store and bought a bunch of woodscrews  in case there were no shops but ravening herds of carpenters. At least a wood-screw is not going to go 'off' so long as you keep in reasonably dry and salt-free. Our planning for an uncertain future w.r.t. food didn't have such a good record. 20+ years ago, with two small children at foot and one car we started a relationship with Munster Wholefoods, who would ship for free for a minimum order of ?£200?. Even with 4 people and the unexpected guest to feed, it was hard to find £200-worth of groceries unless we were prepared to eat A Lot of lentils. I still remember with shame the 6 x 500g packets of gram-flour with which I was going to make mmmmm good pakoras and bhajis. I think we used one packet. A few years later I opened another packet and found a big pock of green mould on top: so they all went to the chickens. 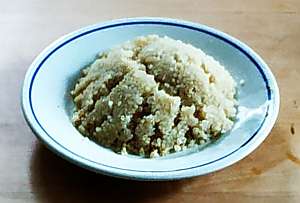 With Coronarama everyone seems to be looking at the further, dustier end of their store cupboards. And I am looking for vehicle for our parsley glut. I was talking to Dau.II aka Cookie my GoTo for culinary advice and she rattled off bulgar wheat, cous-cous, rice all of which would take parsley. But when he got there the cupboard was bare . . . except for 500g unopened of Quinoa Chenopodium quinoa. And if you've been living under a stone since quinoa got trendy you'll need to ask for keen-Wa not Kwinnoa in the health food shop or risk getting sniggered at. The though being the deed, I decided to put 60g = 2oz of the little off-white seeds into a dry sauce-pan and roast them while the kettle boils. When you add the hot water to the much hotter sauce-pan [heavy bottomed for pref] there is a most satisfying explosion of steam and hot spittle warOOOMPH!. Cooking for 15 minutes was enough despite the packet being 9 months beyond sell-by. There it is [R above] run through a strainer and blutted on the plate. Could be porridge, could be cous-cous, could be rice-pudding. It's fine, it's been rescued from the dark while it is still edible . . . so I won't need to be bullied into eating it - with parsley or. as I did, with a little grated cheese and a slug of olive oil. Nothing wrong with a plate of beige. Now that I have established the viability of that pack of quinoa, I am thinking about other options: quinoa-and-pork pasties; quinoa kedgeree; coronation quinoa; quinoa con carne; quinoa chinois . . .
Posted by BobTheScientist at 07:32