Icing on the cake of day 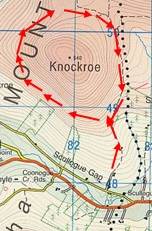 I R all alone on the [South] side of a hill. The Man has decided that we can only go 2km from our homes for exercise - or further if we have to buy food, booze or pain-killers. So no beach-combing for me. But yesterday I put one over on arbiters of travel because I think I was 2.2 km from my back-door at about 12:15. But the elastic pull of Institutionalisation dragged me back from the brink of escape and I turned W for home. I'd put The Blob to bed; had some scoff; washed the dishes; sent a G'luck in the exams card to my project students. It was cold inside, fresh outside but not enough to light the fire, so I decided to go on a walk deisul [sunwise] around An Cnoc Rua, the Red Hill which names our townland. You can of course do the route widdershins but that saves the harder part for last rather than getting it over early. Of course, I met nobody, indeed saw nobody unless you count the driver of a blue tractor pottering about in the valley. 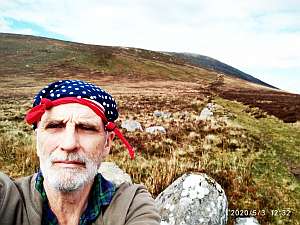 It was nice to be able to concentrate on the walk, the birds, the rocks, the very day, rather than Bo Peeping for sheep [widdershins!] which is what dragged us up the hill so much the last two years. But one of my morning chores was to check the water and count the legs of the sheep [N = 76, all present and correct, thanks] in the field across our lane. We had a spill of rain earlier in the  week, so the N side of the hill was squelchy and will remain so unless we cop a long dry summer like 2018. There thus being nowhere to sit, I soldiered on until 824502 where a) the path forks b) there is a flat-top boulder c) I sat & ate my apple d) I snapped a selfie with Mt Leinster over my shoulder. I share the photo to give you a hint about what Vuitton, Cardin and other Parisians are thinking about for their Summer Collection. From apple-stop it was down-hill all the way and sometimes I lollop down the track in a shambling run; but me poor ould knees weren't up to that yest. 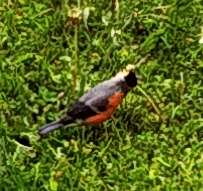 I had a sort of a late lunch: enough to prime me for a zzzzzz but I noticed a particularly striking passerine bird and his rather dowdier Missus on the grass just outside of covid-distance from the front door [crap snap R]. I couldn't remember its name - if I ever knew it. And without a name Peterson's is quite hard to navigate for a solution. But concentration (paying attention to the salient detail is what twitchers do) and Google [Ir bird pink orange breast black head] led me to bullfinch Pyrrhula pyrrhula whose name comes ultimately from the Greek πυρρός (flame-coloured) from the brilliant breast. I watched them through the glass for about ten minutes; eating dandelion and clover seeds from my ragged lawn. I was a great privilege and a great lesson in leaving the grass alone: it supports a world of life that we are usually too busy to see. 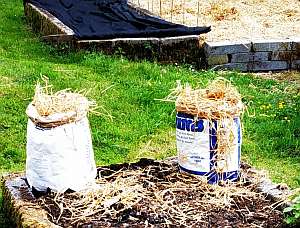 Dau.II called at tea-time . . . because Dau.II. I told her about my bullfinch epiphany and she told me about the antics of 'her' seal which hunts and fossicks in the River Lee immed beneath her 4th floor window. We talked about the dinner . . . because >!cookie!< and that led to the scut end of a bag of sprouting potatoes which I am pushing up the menus because they must get et. Between the two of us, it was determined that I could plant spuds experimentally in paper bags with a few holes cut in the bottom. The sprouts were oddly at one end of the potatoes, so I cut off the unsprouty end for dinner and put the other half in potato/feed bags half-full of compost with the neck stuffed with straw to weed suppression. One thing I like about this [apart from the no-dig lazy-arse aspects] is that it fills up to the very corner of the veg-bed which is always under-utilised. I debated about leaving the bags just anywhere out the way - and it's not to late to embrace that option. If I get one potato, two potato out of this I will be ahead, and delirah.

Just a perfick day, I'm glad I spent it with me. Something yompy, something pretty, something utility; two slices of sourdough toast, an apple and a lot of weak tea. Perfick!
Posted by BobTheScientist at 08:04