Fruiting bodies are many 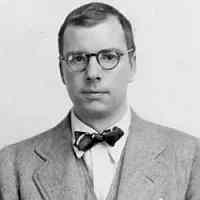 P, my New England correspondent and copy-supplier,  alerted me to the passing of John Tyler Bonner [a younger edition seen R] earlier this year: Bonner was still writing in 2013! I had assumed him long dead. And that assumption is reasonable given that he was born 12 May 1920. Bonner is science-famous for his work on slime-molds like Dictyostelium dicoideum which, when the good times roll, exist as single cell amoebae sliding around scarfing up bacteria for dinner. When the going gets tough, these individual life-forms gather together into a multicellular slug which makes its best progress to a hopefully more habitable clime. 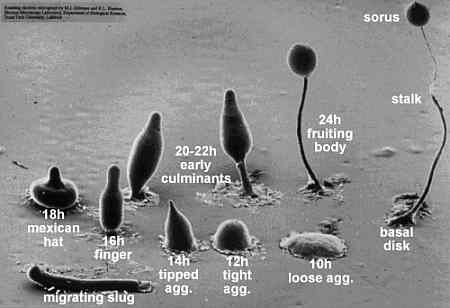 If /when the migrating aggregate reaches the Promised Land, the previously identical-looking cells differentiate to fulfill several different tasks. Some of them form the foundation and some form the body of an fragile looking teetering stalk with a spherical bollupe atop [Bonner movie]. It is only the cells at the top of the tree that form reproductive spores which make up the entirety of the next generation of amoebae . . . sliding around scarfing up bacteria for dinner. And so life continues.

For Bonner this simplest, transitory, form of multicellularity was key to understanding how we [ants, birds, crabs, dogs, eels, flies, goats, humans] scrabbled ourselves together to have a larger, more cooperative existence. He spent many years doing careful observations to work out a) how the amoebae came together b) how they stuck together c) who would finish up at the top of the fruiting body. It found out that the coming together was driven by a chemical attractant which was given off by amoebae near the centre of the cathering slug and detected by passing amoebae. Because he was Harvard trained, he called the mystery molecule acrasin after Acrasia, a witch in Edmund Spenser's Fairie Queene who attracted men and turned them into beasts. The fact that slimes molds are members of the Acrasiales is only icing on the waggish clever cake.

Bonner is more widely know for a fat dozen of books making key concepts in evolution and development accessible to numbskulls like me. Not actually me, however, because I could not recall reading any of his books or indeed even knowing of Bonner's existence until after his death. I went as far as checking out his book Why Size Matters From Bacteria to Blue Whales from Wexford Library. It's a pretty good general introduction to the constraints and advantages of being a particular size. Bonner has summarized his musings into Five Rules of Size 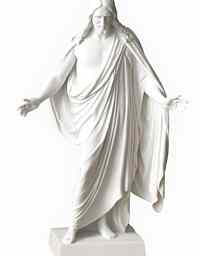 In one of his books, Bonner develops the idea that fish continue to grow in size after sexual maturity. As a keen fisherman, he recognises that this is A Good Thing - he can always hope to land a monster. On a cruise in the Hebrides, with a fellow scientist and angler, his boat pulls into a remote harbour where the fishing boats are watched over from the end of the quay by a statue of Christ. As they pause to wonder at this article of faith, a local man sidles up to them and says "We call it 'the one that got away'".

All mammals, for example have capillaries 10μm in diameter because they need to winkle between cells on average 10μm across. If they were wider they wouldn't fit, if they were narrower they couldn't allow red blood cells to squeeze through the gap to deliver their load of oxygen. And of course the proteins that carry the oxygen haemoglobins are the same size in mice and whales.  JBS Haldane wrote a famous essay called On Being the Right Size which skims over some of the detailed calculations which Bonner graphed in his book. Haldane's essay has the advantage of being shorter and available. Then again so is the PDF of Bonner's 2006 essay for Natural History Matters of Size from which I have snagged this neat [and not obvious to all thinking people except in hindsight?] graph of one length vs another length: 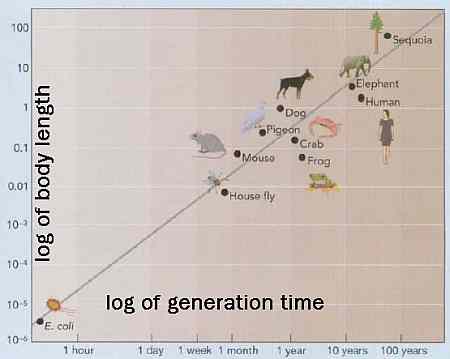