Dinner in the forensic canteen

I had a most peculiar dream the other morning. Actually, of course, all dreams are damned peculiar but I never remember them because I am primed to spring from bed at first light or 0600 hrs whichever is earlier. Dozing in the morning is the way to bump up your dream quotient and maybe, with no 9 o'clock classes, I may do that more often. And why not - dreams are thought provoking and may be the source of new ideas. Kekulé famously had the structure of benzene delivered to him in a dream. Some really smart people, before and after Carl "Memories dreams & Reflections" Jung have pondered on wtf is going in in our heads at night. But it's not necessary to know why or how something works; to know that it works and thereby get some benefit may be good enough.

The dream, Bob, the dream, let's get this over. Relax, mate, it's going to be an anti-climax for you as it is for everyone involved. The monumental and frankly weird tumble of images and irrational rationalistions which leaves us breathless upon waking, looks slight and inconsequential on the page. Soooo . . . 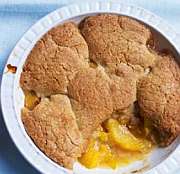 I'm about to sit down at a table where two of my pals are finishing their lunch: one is my roomie Θ and the other is a blend of my pal Tim, now in Gaillimh, and Hugh "House" Laurie. The setting is clearly informed by my credit where salad is due experience in March as is the story as it develops. As I look at my scoff, Tim/House is waxing erudite about his slab of peach cobbler and saying that the chef (probably Margaret) almost forgot to put the sugar in with the peaches because he can tell it was added later. I'm about to call cobbler's awls to this, but zip my lip because I realise that Tim/House is not me but pays attention to his chop. Even if it's a slab cut from a catering tray of generic institutional food.

I put this out there for three reasons