These Coronarama Days are shifting many of us out of a complacent normality and forcing us to do things differently. It's altogether too much for some: I had a plaintive e-mail postscript from an acquaintance at work confessing that she was overwhelmed by it all and depressed by the challenges of working from home which had brought to the fore an existential anxiety about What is Work? If you have a routine - park car; hang coat; check email; coffee; have meeting; check email; lunch; write report; tea; check email; check clock; go home - then day follows day without requiring much thought. There's a lot to be said for a permanent-and-pensionable. Disruption: death of a colleague; rejection of a grant application; being passed over for promotion - can trigger Koyaanisqatsi (a state of life that calls for another way of living) reflections.

Weirdly the requirement of physical distancing and house-arrest has triggered more comms in certain quarters. Dau.II, for instance, calls from Cork every day. Her telecomms plan includes unlimited national calls, so why not? I doubt if we'd talk so much if she was living in the same house. Since the end of March my genes-in-common family have been having a MultiChannel Zoom session every Sunday. 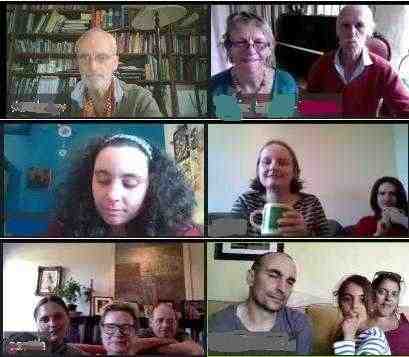 Actually weekly is too much altogether for some sections of the clan and so they come every other week. We have two super-creative singer-songwriters in the family who are both trying to get their music Out There to a wider public. Like Milton, there is no point in having talent if it's lodged with me useless, like.  My sister works for an alternative - aromas, bells, crystals, drums, . . . yoga, yoghurt, zebra - culture venue in the West of England. She gave The Neffie a puff in the latest on-line newsletter but confessed that it had reached only 42 clicks. I've also done my bit. but I have been underwhelmed with mail from Ukraine about the lad. That triggered a general cry about why don't you write about us in The Blob?? Which was tempered by Dau.II's [true dat] assertion that while she might get mentioned in the 1st paragraph the rest of the post would be off down an obscure rabbit hole a long long way from Cork.

So there you have it, my family don't read The Blob because it's not about them. And even if, like now, I write something almost exclusively about the family, they won't notice because they don't make a point of reading The Blob. In a week's time it will have slipped off the front-page and Nobody Will Ever Read It. I kinda like tuning in to the familizoom, it's quite inconsequential but has a certain phatic utility. I guess we'd hear , without help from zoom, if one of us fell sick or set fire to something. The most important thing is to choose your back-ground: for me having more books than anyone else is clearly important.  The techies have found that you can blue-screen the background so it looks like you're in the Machu Picchu talking to a llama, so that's mildly amusing. 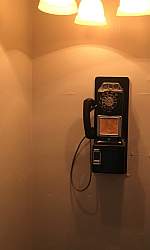 Finally we may reflect on the amazingness of being able to generate the picture above in real time, even if quite crappy and pixellated. When we lived in Ireland in the 70s, we never had a land-line at home. In a few of the flats we lived in (and there were many) there was a a payphone in the lobby [like R]. To get a phone installed you had to a) fill in a huge application form in triplicate b) enlist your TD's support c) wait 8 months. It helped, apparently, if you were a doctor. In 1981 we rented an apartment in Boston. I went down to the Ma Bell shop and chose a telephone to match the paint on the walls and was told the line would be up and ready by lunchtime the following day. Ireland caught up with this fortune-making concept about 15 years later. The Beloved use to fantasize about being able to see a picture of the person to whom you were talking  - science fiction, like. Skype is only ~15 years old. Zoom came 10 years later and only became profitable last year.
Posted by BobTheScientist at 07:35