This year, since the beginning of March, I've been gardening with very limited resources. The Beloved dropped by our local, almost moribund, garden centre before lock-down and bought what they had for seeds: a packet of peas Pisum sativum and a very thin packet of Swiss Chard Beta vulgaris (flavescens).  I planted them all out along with some saved runner beans. The best of my beans are now 80cm tall and the peas are showing blossom.

In clearing space for the potting factory, I came across a bag full of seed packets all well beyond sell-by. Where the date was still legible I tried some triage planting which was only successful for a 2015 packet of beetroot also Beta vulgaris. The rest of the seeds I shook into a big bowl and spread them out across a recently cleared outdoor bed. 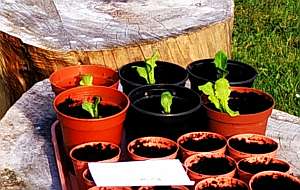 A month later, I was just about the rake over the dusting of tiny weed-seedlings in that bed when I noticed something that looked suspiciously like lettuce Lactuca sativa. I got down on me knees to pray for a closer look and saw another lettuce-like object LLO and another and another. The soil was bone dry and I was able to lever each tiny-tot plant up and shake off the competition from the surprisingly long root of each plant. Six BLTs in about a month's time, I reckon. I am always surprised and delighted when my transplants don't shrivel and die immediately. And I was sufficiently confident of those future BLTs after the first six survived for two nights indoors, that I went over the source bed again with care and attention and rescued another 6 baby lettuce.

Lettuce is tasty and wet and I like it, but it is also tasty to a very wide range of Bob-competitors: starting with rabbits and slugs but including the causative agents of bottom rot, lettuce drop and gray mold; powdery and downy mildew; as well as big vein virus, yellow aster virus . . .
Posted by BobTheScientist at 07:55