Unintended consequences department.
We live in The House the Bomb Fell On, or rather the house which Felix built, in 1941, from the rubble of the house the bomb fell on. When we bought it  in 1996, the house was still glazed with war-glass; not quite bath-room quality frosted glass: you could see the hill on the far side of the valley through the kitchen window, but not the sheep on the hill. As a domestic energy efficiency consultant, there is no way The Beloved was going to tolerate single glazing, so we kept the wooden sashes but replaced all the glass with double-glazing sandwiches.  Eeee, it were great! We could count the leaves on the ash-tree at the bottom of the yard, and identify the birds on the lawn. The down-side is that it is now worth washing the windows occasionally. 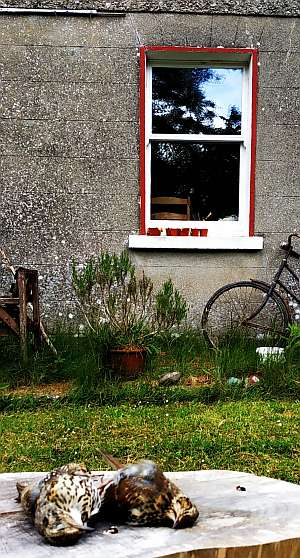 These last few days, and not for the first time, I've been hearing a dull >!thunk!< as I sit bobby-no-pals quietly blog-blog-bloggin' the days away. Dang! Bird-strike, I think, after I've worked out that nothing has fallen off the kitchen counter. There's not much to do. A full-on head-on collision with an object as immovable as a double-glazing unit, is like taking a no-hands header into an empty swimming pool. Sometimes there is a body on the ground, sometime The Stunned manages to fly off to nurse the head-ache. Last Sunday, I noticed a dead adult song-thrush Smólach ceoil Turdus philomena right by the front door, so went once round the house on a bring out your dead run and found a juvenile of the same species. I laid them out prior to disposal [L].

Between taking the photo and writing about it, there was another >!thunk!< on the front windows. But this must have been a glancing blow because, no body. You can imagine what's going wrong here. The glazing is so clean that the birds are deluded into thinking that there is more vegetation, or even more sky?, through that gap in Yer Man's nest. The dark reflections in the window don't really do justice to how tree-like it all looks in reality and the upstairs windows look brightly sky blue. The birds hopeful journey to fields a-green and pastures new is brought up all standing - at least it's quick.

Then agin then agin, 'tis an ill wind which blows no good. When I laid the poor thrushes out on the bird-table, a half-dozen ants dropped down and started scurrying about the surface. There's an ant-nest just under the front door-step and they must have been foraging about the corpses looking for food: lice [poverty prev] of the insect [six legs] order Phthiraptera or mites [scabies prev] of the arachnid [eight legs] order Mesostigmata. It really can't get more specific than that because these ectoparasites are remarkably limited in their host range. Should I therefore leave the dead birds at our stoop to provide a bonanza breakfast for the ants? I should not; because the next thing you know the rats in the distant farm-yard will be knocking on the front door asking for more.

Talking of scavenging carnivores, yesterday in broad daylight the avian funeral parlour was emptied. I did not realise the corpses had gone until I noticed an explosion of downy feathers in a corner of the yard. Our yard has been taken into the territory of an elusive black cat with scruffy longish hair. I'm guessing that this feline has solved my bird disposal dilemma. The cat's presence is probably invisible good news on the rodent control front.
Posted by BobTheScientist at 07:37