</bollix Alert> 04Jun20: The paper which triggered this post has been flagged EOC by the Lancet. EOC Expression of Concern is a not-quite[-yet-]retraction. The Grauniad has investigated the company which supplied the data on which the original study was based. Also check out commentary on Metafilter. </bollix alert>
A former talk-show host and current Head of State says:

I think people should [take hydroxychloroquine], if it were me,
in fact, I might do it anyway. I may take it ... I have to ask
my doctors about that. But I may take it.
Bob the Scientist says:

You're about twice as likely to die in hospital of covid-19
if your doctors give you hydroxychloroquine than if they don't.
Who to believe? It's important because you can't do all the research yourself: not enough time, not enough data, not enough savvy, not enough tool-kit. Your knee-jerk reactions = gut-instincts don't work <be honest> for your bets on The Grand National, so they defo won't work when you're choosing treatments for your mother-in-ICU. That's why informed consent is often a polite charade as the medics-in-charge frame the questions / options in such a way as to elicit the answer the Doc believes is best for the patient. Put your cynic back in its box if  "best for the hospital's bottom line" edges forward in your mind.

There is a class of people out there whose main qualification for being an Influencer is that they have a work ethic, a gabby mouth, an attractive personality and have been lucky. Like myself, jacksepticeye, a nice, funny BIFFO from Ballycumber posts every day. Over the last 8 years he has accumulated 12,000,000,000 views of his youtube channel. He's got a degree in Music Technology and Production from LIT.  Now you might turn to Jack for insight into Animal Crossing but maybe pensions, art history or epidemiology not so much?

The cult of personality is mostly harmless so long as everyone respects the guidelines of non-overlapping magisteria: Beyond what we can all read in Time magazine, I know nothing about meditation; the Dalai Lama and Thich Nhat Hahn know nothing about science. The other two lads have considerably more influence but you'd be better off talking to me about data, evidence, and statistical analysis . . . and I won't gab on [much] about Ahimsa, Bodhisattva, or Chakras . . . promise. Sometimes you can be fooled: Linus Pauling was a colossal biological scientist with a string of Firsts and a Nobel Prize to his credit. But he was [whoa evidence!] just wrong in barracking everyone around him about a clearly biomedical issue like the cancer-curing capacity of vitamin C.

All kinds of people, with all kinds of random qualifications get to be President of their Country. Proper order: you wouldn't want to office to be held only by lawyers, publicans or pensioned politicians. Heck, I wouldn't want all presidents to be competent in science, or even numerate. Quiz time: who, before they became Pres, was a professional teacher; tailor; soldier; sailor; comedian; peanut farmer; poet.  It's real nice when your head of state has a few enthusiasms; it indicates work-life balance. The UK Head of State with the corgis and horses; her grandfather with his stamp collection; the Dalai Lama can fix your watch; Churchill was a nifty brick-layer. But you hope that these small obsessions don't edge too much into policy or public pronouncements. FDR kept both his polio and his adulterous bonking under covers. At the top I quoted the POTUS early on in the pandemic suggesting that hydroxychloroquine was a potential cure for covid-19. He doubled down on this affirmation later by saying that, if it did no good at least it could do no harm and later still telling the world that he was taking the stuff as a prophylactic.

Hydroxychloroquine HCQ and its relative chloroquine CQ, are anti-malarial meds which have been around in that capacity for 65 years. More recently they have seen some success in treating inflammatory and autoimmune diseases, including lupus and rheumatoid arthritis. Earlier this year, somebody noticed that people already on these drugs seemed to fare better when they presented to hospital with Covid-19 symptoms. In desperate times, when all other therapies have failed to work, some doctors will try anything rather than allow people to die quietly . . . even if that something is not FDA approved; even if there is no solid evidence supporting its efficacy; even if it's something they read on the internet or heard mentioned in a news cast from Bergamo. In January, I cited a case of Olanzapine being prescribed for senile dementia despite it being likely to precipitate a stroke. Trump is not the only person who is pushing HCQ as a cure for covid-19; doctors all over the World are giving it a go presumably after a well-framed informed consent conversation.

Well Stop It! Stop it Now!
A very recent paper in The Lancet by 4 MDs (Mandeep R Mehra [Boston], Sapan S Desai [Chicago], Frank Ruschitzka [Zurish], Amit N Patel [Salt Lake City]) has accumulated a lot of data and shown that hydroxychloroquine HCQ and chloroquine CQ with or with Macrolide antibiotics MAB are positively harmful.  Let's look at the numbers. They started by trawling the published literature to identify any controlled experiments of these drugs in a Covid-19 setting. That 'registry' got to include nearly 100,000 patients from 671 hospitals across all 6 continents. My summary tables count 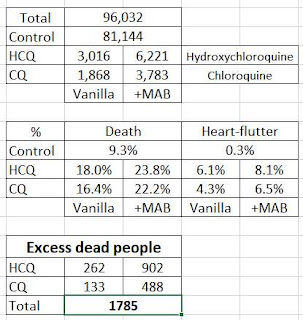 If you are in hospital with covid-19 you are neither asymptomatic nor mild-to-moderate, you are ill with a potentially fatal infection. 11% of the people in the study didn't make it. That's more than 10,000 coffins. But the point of the study is in the last table. ~1,785 people are dead because they were actively and consciously given a treatment which we [now] know to have significant adverse side-effects. More than 1,000 of them are US citizens. Insofar as anyone pays attention to pronouncements by the head of state in formal press briefings [and what's the point otherwise?] then Donald Trump has used his influence to off people whose life liberty and the pursuit of happiness he swore to defend.
Posted by BobTheScientist at 07:30