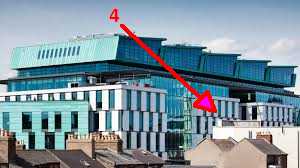 The COVIDs are coming! Came to work yesterday = Friday as normal and was told that my Alma Mater TCD had fielded a case of CoViD19 and they were shutting down. There was nothing so dramatic, let alone timely, on the TCD website. . So I googled for deets and found:
"The relevant part of the University (Floor 4 of the Trinity Biomedical Sciences Institute), and the lifts in TBSI, have been closed as a precautionary measure and will be cleaned in accordance with HSE guidelines. The rest of the University is open and operating as normal.”
Most of the similar reports have shown a picture of the iconic Front of Trinity:

which is about as far away from the TBSI as possible while still being on the same campus. If you a) live in Dublin and b) want to avoid buildings where one CoViD+ perp has been identified, then get your search image from the more modern building at the head of the post. Dau.I works in the library about 200m East of the TBSI, I'll tell her to cross the street when she goes past the building <not>!

I know rather more than I should about this because I used to work there up until the end of 2012 and was having occasional meetings and teaching gigs up until about 2015. Right up-close-and-personal there: on the 4th Floor of the TBSI in TCD! Around about the time I ran out of TCD money and had to get a proper job at The Institute, a palomino left the same lab with a PhD to try the commercial world of research in MegaPharm.

I sent him an ironic e-mail "We escaped just in time"
To which he replied "My great timing! I was there yesterday! The TCD Postdoc Society organised a careers day and they wanted people who managed to escape to industry. I dropped by the 4th floor to say hi, to the old lab. The sick guy is from XXXX's lab. Today when I got to work I was told to get my laptop and work from home. No good deed goes unpunished!"

That helped me zero in on the perp to the extent that my old lab-mates were not in the front line of Assault by CoViD . . . or at least it will be a few days before they go symptomatic. I was tickled by the idea that they would be doing a blitz on the lifts. When I worked there I never used them! I couldn't countenance the carbon footprint of raising me up without any effort on my part: like a balloon. On the stair front, I don't do trudge, so I always run up t'buggers . . . and am utterly out of puff on landing. This story gives me a further reason to be lift-smug because CoViD emphasises that these vehicles are a perfectly designed incubator / propagator for spittle-borne infections.

Another of my TCD contacts is the lab manager for another of the laboratories on Floor 4 and I commiserated with her about the task ahead. De-contaminating a movable box with six clear, cleanable surfaces is imaginably 'easy' - just get in and souse the surfaces in bleach or fill the box with ozone. Cleaning a lab full of drawers, cupboards, shelves - all laden with bottles, beakers, plastic and metal gizmos and biological materials: that sounds like a nightmare unless you're going torch the whole place and have all your Effectives start their experiments again.

Trinity is a big business; with 2,600 employees and 18,000 students. They can't [yet] close down the whole place for one case, they have to be proportionate. This weekend several plane-loads of Italians are coming in to Dublin because they had tickets for the [cancelled] Ireland vs Italy six-nations rugger match. Insurance won't refund your money if you choose not to fly, and what's not to like about the prospect of a weekend mooching around Dublin without the distraction of the sporting fixture? It's going to be impossible to be up-to-date with CoViD19, so The Blob isn't even going to try. But it was hard to resist a comment on this chapter.
Posted by BobTheScientist at 07:31