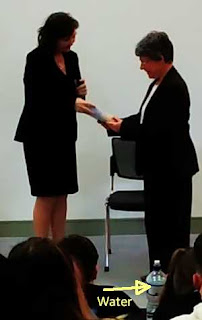 Tremendous coup at The Institute: someone persuaded Jocelyn Bell Burnell [bday tribs] to follow me down to Carlow to give a talk to local secondary schools about the fact that we are all made of stars. She is a national treasure and has done as much as anybody on the planet to recruit and retain young women in physics.  As a post-graduate student, she famously didn't get a share in the No-Bell Physics Prize in 1974 for discovering pulsars against the express orders of her boss . . . who did win the Nobel that year. The delicious irony is that, partly because she missed out on the earlier gong, she was awarded a Breakthrough Prize in 2018 that was worth $3 million - about 30x more than the might have been Nobel. JBB donated that money to establish a scholarship fund to facilitate unlikely people [like women] to do a PhD in physics. There is so much to like about her style! [R we gave her a biography of local boy John Tyndall]

Before she could scan the heavens for radio-waves, and in due course discover the first pulsar, young Jocelyn had to build her equipment. I'm ten years younger than her and in a different field but I was too late for the era which blew their own glassware to make the instruments with which they measured their tiny patch of the infinite universe. All pipettes and Petri dishes were glass however; everything washed after use and ready for another experiment.  It was left to planet-eating subsequent generations in Genetics to adopt use-once-and- throw-away economics. The Interplanetary Scintillation Array radio telescope was built of wires strung on poles across a 4 acre field near Cambridge, England and Jocelyn became practiced in driving those poles in with a sledge-hammer. No bottled water in those days, just hard graft and carry on. 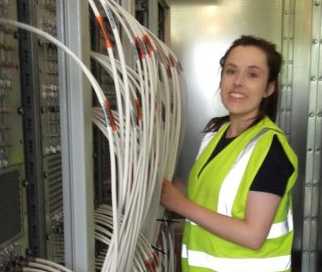 I am in my last weeks teaching at The Institute and one good reason for going is to make room for a younger person who will be a more attainable role-model for young women in science. I don't imagine any of my students look at a silverback like me and think "with hard work and good luck I could become that person" but they could do that with a few of our younger, fitter lecturers. There must have been an element of that when the schools talk was arranged at The Institute. Somebody had the bright idea to invite Aoife Ryan a PhD student from DIAS to talk about her work and the journey that brought her there. She wearing the hi-viz jacket because that is the 'lab coat' for radio astronomers and, like JBB, Aoife Ryan had to go out and assemble her own measuring device. Things have moved on in 50 years, wooden stakes have been replaced by plastic poles and the receivers are more sophisticated /expensive / sensitive, but the repeated history was striking. She couldn't have done this on her own because the field is too big and the ambitions are much higher, The LOFAR [Low Frequency Array] telescope, indeed, is bigger than a country as it patched together sites across 2000km to the other end of Europe. The Irish field is in Birr, King's County; just up the road from my home-place.  LOFAR ias centred on a site in Exloo, NL but has stations in UK, DE, IT, SE, FR, PL and LV, as well as Ireland. Birr Castle is a particularly appropriate location because from 1845 to 1912 it housed the largest telescope in the world, a record currently held by LOFAR.

What do you do with such a mighty, and nifty, piece of appropriate technology? Aoife Ryan is using time on LOFAR to study solar storms which spew out electromagnetic pulses. The Sun and fluctuations in its activity affect and surprisingly wide range of events on Earth 150 million km away. We're all hoping the next Big One won't be pointing directly at us like the Carrington Event which fritzed out the electromagnetic comms world, such as it as in 1859, 161 years ago this August. But  we lived simpler in 1859 and 1959: cars ran without on-board computers; people wrote and sent letters; at a pinch folk could cook on an open fire if all the power stations blew their gaskets. A world without electronics will be far more compromised than one with COVID-19. A roomful of teenagers listening to someone in their 20s being so brightly enthusiastic and so clearly accomplished - some of them must be marking their ambition cards to think "I could do that, I could be that person, let me at it, get out of my way . . . the Universe, here I come"

More Women in Science
Posted by BobTheScientist at 07:42