hier gaan over het tij
de maan de wind en wij
Hoe goed is jouw Nederlands?  It's like Engels but not exactly the same: here over the tide go the moon the wind and we. That's the dedication on the Oosterscheldekering [East Scheldt Barrier] an amazing civil engineering project protecting Zeeland  from inundation from the sea. The terrifying destruction of the 31st Jan 1953 dyke swamping floods made the Dutch government sit up and start taxing the people to build a set of storm barriers to keep land and sea separate. The Delta Works were impelmented over a 25 year time-frame at a cost of about €1 billion. The original plan was to simplify the Scheldt Delta with the creation of an impenetrable Oosterscheldedam but oyster farmers and ecologists decried the loss of a unique shallow-sea environment and a vastly more complex Kering was constructed instead. And expensive!: the build-cost of the Oosterscheldekering alone ballooned to €2.5 billion and maintenance and operation costs are about €17miliion each year. But it works! The gates clank shut when the meteorologists announce that a storm surge of at least 3m is expected; most recently on 10 Feb 2020!

Now they have a massive storm-surge barrier in a place where the wind can gust as high as anywhere in the country. Seems a shame not to find alternative use for it. When the canals of Friesland are so iced that no traffic can pass, the locals put on their skates and do the Elfstedentocht a 200km circular race passing 11 towns in the province. The last time a sustained cold snap lasted long enough to have the race was 1997. In Winter 2012, excitement was cranked up again but the event never happened because the ice really wasn't thick enough. Climate change makes it really unlikely that anyone alive today will see the Elfstedentocht happen.

But there are other weather extremes to embrace! When a truly tree-flattening gale in the right direction is forecast for Zeeland, they organise a Tegenwindfietsen [Against Wind Biking] event. Tom Scott, who made a guest appearance on Sunday on Hannah Fry's RI Christmas Lectures, was on the Oosterscheldekering last week watching succession of Nederlanders force their traditional gearless sit-up-and-beg bicycle into the teeth of a 120 km/h gale. We! Kriehen! Sturm! - we get a storm - goes the cry and folk with calves like knotted cords flock to register for the event. Tom explains that the Drag goes up with the sqeare of the wind-speed, so it really requires heart to complete the course.

Go Nederland!
But that's not all. When the 1953 floods occurred, the Afsluitdijk across the mouthbetween Noord Holland and Friesland had just calmed the Zuiderzee into the Ijsselmeer. That barrier was said to have recouped its costs on that single night. If we can do these piffling billion €€ flood abatement projects, the Dutch engineers ask, why not scale it up and separate the North Sea from the Atlantic? 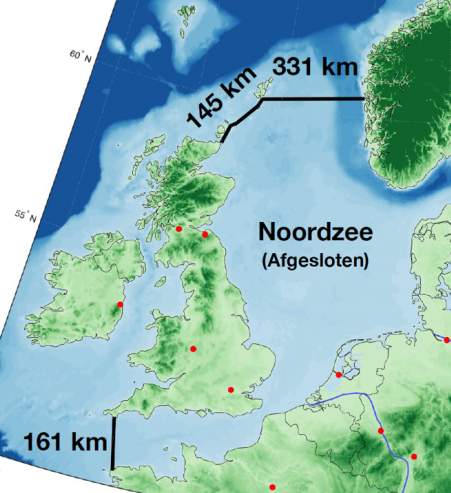 Our grandchildren may NEED this Northern European Enclosure Dam. Not even the Dutch are suggesting a Kering that is basically open but ready to close when the mega-tide comes in. Apparently a dam of these dimensions is feasible from an engineer's perspective. The footprint is only 500km long, the maximum depth is only 350m. What could possibly go wrong? Kiting this idea shows that at least someone is thinking about the consequences of sea-level rise . . . and proposing to fight rather than get under the duvets and wait. But really the proposal is to stir up some mojo to do something else about anthropogenic climate change - like give up the old car, the toaster, the air-con and the effin' methaneburgers.

via MeFi where there is
much interesting commentary.