Do I know aNNything about horses? Beyond that they have four legs and walk on one toe-nail attached to the end of each limb [it's the keratin, silly]; not much.  Horses are in the order Perissodactyla which includes rhinos [prev] and tapirs; the latter two groups walk on 3 toes so the group is made of odd-toed ungulates. There must accordingly be even-toed ungulates; and there are: I call them Artiodactyls but you may call them cows, sheep, deer, antelopes, camels, llamas and pigs. If you're a purist and are prepared to ignore footy details then you should include whales & dolphins. We humans have a rather generic base-mammal pentadactyl limb [except when we don't]. Horses (and llamas etc.) also start off with 5 toes but progressively lose them as they develop in utero.

All that ignorance about Da Nags hasn't stopped me writing about them in the past:

A list, a list, cries out for a quiz, a quiz. These horses are, or were in their time, more famous than kings or potentates. Can you place them?
Seabiscuit was, as the link attests, made into a heart-warming film. Like Desert Orchid in more recent years, Seabiscuit was a favorite among amateur horse-fanciers: the kind of people whom bookmakers love. They know neither how to spell 'form' nor the difference between a fetlock and a forelock, but nevertheless have a punt on the Grand National because they like the sound of the name. I was idly skimming the blogosphere the other day and the name Man o' War popped up and it tinkled a bell down deep among the neurons. Wasn't that the horse which ran against Seabiscuit in 1938? The numbers didn't add up, Man o' War was at his peak in 1919 and 1920 and was well past his racing days in 1938. But there is a connexion, he was the sire of War Admiral and the grandsire of Seabiscuit so the famous race was a family affair. Man o' War earned just shy of $250,000 from winning 20/21 of his races and was then retired to stud (it's a hard life), he only stopped covering mares after he suffered a heart attack in 1946 and he died the following year. He was buried, like Copenhagen, with full honours. 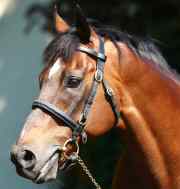 It takes a helluva a lot of pall-bearers to carry a horse coffin . . . and you have to make the box yourself because there doesn't appear to be a market for horse-coffins. Why no market? Because most horses are 'put down' when their care becomes too troublesome to their owners. Danehill Dancer [R] was, for example, was euthanized due to the infirmities of old age, just last month in Ireland.

It worries me, the discrepancy between our treatment of end-of-life issues in a) any human b) any animal. If terminating your favourite horse/dog/cat is called putting the creature out of its misery, why are we so determined to keep people alive whatever their prognosis or level of suffering . . . except if we really don't like them.

And did you notice the War Admiral and Man o' War connexion. Stables and studs have a tendency to re-use names and name fragments, presumably for branding purposes.Seabiscuits sire was, for example, Hard Tack, effectively a synonym. But there are limits to what you can call your horse.  Or with more Mental Floss obsessive detail.
You can check here for your clever name; but I'll save you a trip to report that Bob's Pride and Bob the Pool Man have both been taken! There are 450,000 names currently on the register and 4 x 10^33 possibilities . . . or fewer: the names have to be pronounceable by race-commentators.
Posted by BobTheScientist at 08:00