What will seem grotesque unbelievable bizarre and unprecedented about today's Ireland from the standpoint of 2039 or 2069? Apart from eating meat or sporting a load of bling? I'm on record as wanting to ban boxing as a spectator sport because it's degrading to watch two people punching each other in the face for entertainment or money. Yes, yes, there are other sports where participants are likely to sustain contact sport encephalopathy but I'm okay with those because the violence and brain damage are incidental to the sport not its entire reason for existence. I don't think we should wrap up youngsters in a risk-free environment - putting yourself Out There is deeply ingrained in our culture if not in our genes. 200+ people have offed themselves by taking dopey selfies since 2011.  It's possibly good for the gene pool in a Darwin Awards sense. But even with boxing, there's a element of informed consent so long as adults are the participants in the ring. On a my rights end where your nose begins basis what adults do in the privacy of their gym is none of my business. My gripe is that grossly unfit people can sit down and watch organised fights, sink a few drinks and put on bets. For shame!

There was a big flap after the airing on RTE last Wednesday of a documentary about dog racing. If you're not squeamish, you can watch the whole of Greyhounds Running For Their Lives. [I'm squeamish].  A number of politicians got up in the Dáil to say how they were against that sort of thing.  Even if they hadn't seen the complete programme. The main complaint about greyhound racing in Ireland seems to be that dogs have rather large litters (compared to, say, humanity and horses) and that at replacement level there are a lot of young dogs which are surplus to requirements in a business that needs only the fastest dogs. I guess that dog breeders are using experience, good judgement and good luck to put 'good' dogs together in the hope of a 'better' pup. Some people in the greyhound trade are casual about what happens to the surplus 'empty mouths' that their breeding programmes and selection regimes will inevitably produce. The TV programme is presumably editted to portray some examples where casual bleeds into cruel. A couple of years ago greyhound racing was banned in some parts of Australia at least partly because of undercover TV footage showing 'live baiting' . Live baiting is when greyhounds are trained to run faster after a squealing piglet suspended by one leg and whizzed around a track. The best that can be said of the human participants in that clip is that they have blunted affect. Life would be a lot simpler, and much kinder, if dog racing was banned.

Segue to donkeys Equus asinus in Ethiopia where we were recently picking teff out of our teeth. Donkeys are essential to the rural (and important to urban) economics in Ethiopia like they were in Ireland 70 years ago. They do all the haulage and owning one is the first step out of abject poverty. Nevertheless, they are, in Ethiopia, to both Christians and Muslims, emphatically unclean. Imperial China had a cunning plan to convert old, dying and dead donkeys into skins and meat and money . . . but it all unravelled. 10 minutes of Rare Earth explains all.

We've moved on from donks in Ireland, they are small and retro. Now we have a peculiar vicarious love affair with thoroughbred horses. More people go on pilgrimage to Cheltenham for the race meeting in March than walk the Camino de Santiago. Now me, I don't personally do sports: since the age of 14, I've only participated in team sports as a form of piss-take. But I do recognise sport's value: it gets people outside, running about aerobically, shedding some kilos, working cooperatively, treating The Other fairly (mostly). Horse racing is not a sport in this sense: indeed it is in many ways the antithesis of sport - the only exercise most 'participants' get is moving the binoculars to see who is closing out the horse on which they've wasted a €10 bet. I say 'wasted' because everyone except the bookmakers are nett losers in any form of gambling. If you want to make a case that, through insider trading and other corrupt practices, some people are making money betting on horses, then I'd listen with attention because it seems likely. £4.5 million is riding on the winners of the ~28 races, there must be a temptation to square some of the jockeys. But the prize money is but a tiny fraction - maybe 1% - of the money which changes hands during the 3 or 4 days of the Festival. 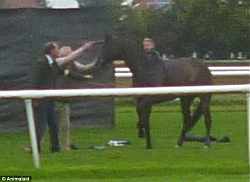 All good fun, you may say. A flutter on the nags; drinks all round if you back a winner; a nice lunch; a lavish dinner; hanging out; memories and war stories. In 2019, however, 3 horses died at Cheltenham; down from 6 the year before and !11! in 2006. Less fun for the nags, who are a long way from informed consent about being put through their paces as part of a raree show. Sir Erec died of a broken leg in 2019 and two other horses were "put down" after "sustaining injuries".  The picture [R] shows Wigmore Hall being done to death 'humanely' and behind a screen after breaking a leg at Doncaster in 2014. Why are race-horse owners allowed to discard their horses when they are beyond the possibility of winning races? We don't do that to retired people anymore. The case can be made that horses are particularly incapable of living through the trauma of a broken leg. And come to think of it we get all tut-tutty about the games in Ancient Rome when there was often a holocaust of animals for the amusement of patricians and plebs. You can make the case that deaths in the Colosseum were integral to the games but peripheral to Cheltenham races. I'm with you on that, and have made a parallel case w.r.t. boxing vs rugger at the start of this piece. But if something like 500 horses run at Cheltenham [and they do] and 1% of them die each year [and they do] then death at the races becomes almost inevitable and therefore integral. Not really that much different from boxing and also shameful.

I am not alone in noting the carnage. At least 1,000 horses were killed on US racetracks in 2018. Our grand-daughters will scratch their heads in wonderment that a civilised society was so casual with the lives of other mammals in the course of entertainment.


Posted by BobTheScientist at 07:32