On Saurday, The Beloved and I went for a walk into Wexford and up the hill which we can see from our kitchen window. It was good to get a bit of stretch especially immediately after lunch when the only alternative is to fall into a drooling snooze and finish up with a wet collar. On the way back we met our Spanish neighbour who was also escaping from her own stir-craziness. Asking a phatic "¿Que pasa?" we got an earful about the tragedy in Madrid's Monte Hermoso private nursing home where more than half of the 130 residents tested Covid+ and 19 of them died. The Spanish government has since declared Eminent Domain to seize all private nursing homes and hospitals. This news gave me a sinking sense of dread because we are only a week behind Spain and on the same trajectory. This foreboding was brought into focus 5 minutes later as an ambulance blue-lighted along the back-country road at the bottom of our lane. It could only be on the way to aid one of our near neighbours.

Because of Madrid, from the depths of my 'mind' an end-of-life phrase struggled to the surface which I tracked down when we got home:

Such as thou art, some time was I,
Such as I am , such shalt thou be. 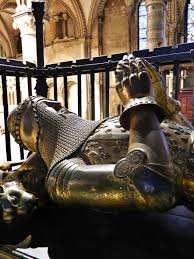 They say this sentiment was originally [in Normann Frensh] inscribed on the tomb [R] of Edward of Woodstock, The Black Prince, son and heir of England's Edward III. This paragon of knighthood or ruthless warmonger, depending on your nation and class, never really recovered from a bout of the bloody flux and predeceased his grieving father at the age of 45. He is buried in Canterbury Cathedral and I remember his tomb, but not the epitaph, because I was at school in the cathedral precincts and sang there twice every Sunday from 1968 to 1972. It was only a step, or 190,000 of them, from there to the start of the Canterbury Tales in London. I have written in awe of Geoffrey Chaucer before, and have indeed read most of that entertaining set of tales within the framing tale. The frame is that a rattle of sondry folk, a microcosm of medieval society, gathers in The Tabard Inn, Southwark and sets off in pilgrimage for the tomb of St Thomas à Becket in Canterbury.

Whan that Aprille with his shoures soote
The droghte of Marche hath perced to the roote
Than longen folk to goon on pilgrimages,
And palmers for to seken straunge strondes
The Tales are funny, dirty, satirical and timeless - recommended. 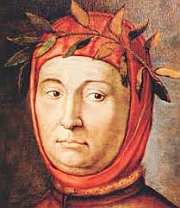 Chaucer owes a debt of concept to Giovanni Boccaccio whose Decameron was written a generation before Chaucer started to put pen to paper. Literally, because Chaucer's Tales were circulated as manuscripts for 100 years before John Caxton got round to printing them. The Decameron, likewise, of course. The Decameron is another set of tales within a rather more edgy framing story: Seven young women Pampinea, Fiammetta, Filomena, Emilia, Lauretta, Neifile, and Elissa and three men, Panfilo, Filostrato, and Dioneo flee Firenze and the 1347 Black Death to hole up in a rustic villa for a fortnight. That is exactly the same period of voluntary isolation which we are requesting people to embrace to stop spreading Covid-19. How did people do Big Brother before Netflix, Grand Theft Auto and Instagram? that is the question. Well The Lads I Ragazzi get to their destination, unpack, and agree that they'll tell each other tales every night until it's safe to return to the city. Not Sundays, of course, and two other holy days of obligation nix the entertainments; so the Decameron is 10 people's stories x 10 nights or 100 mini-sagas, novelettes. Beyond its existence, I know nothing about the Decameron except that Pier Paolo Pasolini made a film of the book.
If we're going to spend the next several weeks in lock-down because of this century's Great Plague, it might be an opportunity to see what was floating the social boat in similar lock-down isolation circumstances 673 years ago in Italy.
Posted by BobTheScientist at 07:39