Bullying at the crossroads 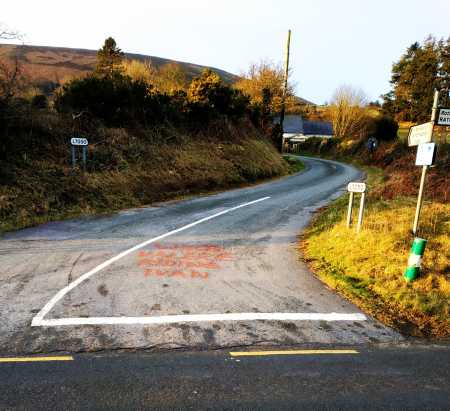 It was one of those brilliant late Winter mornings, when the sun has burned off the frost from a cloudless night and touches up the tops of the trees and hedgerows. I was tootling off to work, leaving in good time so I could drive safely and still find a parking space at work. Being able to do this in daylight is one of the blessings of the lengthening days of Spring. I was arrested by a red-orange blur on the other side of the cross where I join the 'main' road. Then I put on my glasses to read

Who's
Yvonne
Riding
Johnny
The apostrophe is in the right place but the sentence is missing a final "?", so the writer is reasonably educated but considerably spiteful, underhand and disrespectful to Ivan and, of course, Valerie. The fact that the slur is in the most prominent place where two townlands meet indicates that this slighting comment is meant to be widely read and the insinuation propagated. DeValera famously imagined the Irish people represented as comely maidens dancing at the cross-roads - on which goofy sentiment I have riffed before.  I don't think that Irish country-people are necessarily crueller than city folk [like the pathetic wannabe murderers of Bristol] but it seems they aren't going to limit themselves to anonymous innuendo on the internet but are taking their bullying ways to the cross-roads of their own parish. It takes a certain confidence and self-righteousness to be libelling people in the dark. Tsk!

I came across another example of self-confident righteous stupidity at a meeting of farmers and neighbours earlier in the week. We spent a number of days in the back-end of last year working with our neighbours to improve the productivity of the mountains which we own in common. Productivity in fatted sheep, yes, but also in bio-diversity and amenity value. You are very welcome to come and walk the hill, so long as neither you, nor your dogs, harass the sheep: if you see plover Pluvialis apricaria or kestrel Falco tinnunculus, that will be a bonus. Earlier in the week we came together to plan the order of works for 2020 and the issue of [public-liability] insurance came up. The scheme manager, an outsider, suggested that, if anyone was going to use a chain-saw for clearing bushes, then s/he should get properly trained in the use of such machines. I agree: because I've been on a chain-saw training course and have seen the video associated with the course. But one of the men in the room dissed the suggestion in confidently certain terms "I've been using my own chain-saw on my own farm all my life and have never sustained an injury yada yada. . . etconfident etcetera". The only other person in the room, apart from me, who had some formal training, averred that it was a good idea but that his 5-or-6 year old qualification was probably now beyond its sell-by. I did my course at the end of the last century. But no, using the equipment on the farm as they see fit is the right of every red-blooded farmer, even if it results on ascertaining directly that they and theirs are indeed red-blooded.

There are something in the region of 20 farm-accident deaths in Ireland every year. That's about 1% of all the farm-accidents. Farms are 8 times more dangerous than any other class of work-place in Ireland! And Irish farm accidents are above the EU average. In contrast to road-deaths, every one of which is recorded on the evening news; farm deaths are ignored unless children are involved. Farmers have a lobby far out of proportion to their headage or their contribution to the economy and reports of accidents would be bad for the brand; so we don't hear about them. 7% of the accidents [N = 200 every year] involve chain-saws, so my neighbour's confidence in his competence is statistically misplaced. In the last five years, just over 10% of all Irish farms experienced "an accident". The stats must be an under-estimate: that crrrack to the cheek-bone from the back-end of a pry-bar; the whack on the thumb while driving fence staples; that time the knife slipped or when I sawed through my thumb-nail as well as a 10cm Wavin pipe or when I dropped the door of a tipper trailer on my foot . . . none of those got into the official record because none of them brought me to the doctor [yes that sentence is all about me and my mishaps].

Don't get me wrong, I really like and respect my neighbours: they are generous and kind, hard-working and subsisting on an absurdly low and irregular income. But some of them think and do dopey idiotic things because they are complacent, sleep-deprived and quite probably alone at the time.
Posted by BobTheScientist at 07:41