Yesterday, [all my troubles seemed so far away] . . . I was writing about Covid front-liners. One of my colleagues at The Institute, who teaches something useful [as opposed to my thoughts on sphincters and the sympathetic nervous system] to our Pharm Tech students, announced that all of these young women are doing extra hours, volunteering in hospitals. You wouldn't call them bed-pan IV-drip front-line, I guess, but their work-places are going to be a miasma of aerocoronasol for 10 hours a shift. I had a little frisson of respeck: they may not know if insulin is smaller than the pancreas but they can keep steady and kind as they dole out the Ibuprofen. 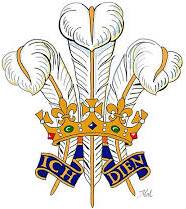 I sent an e-mail to DPharma O'TamilNadu:
Hey Dr V, I was thinking of you just now as Front Line soldier in the fight against the virus and thought you deserved a feather in your cap: Ich Dein "I Serve" is the motto of the British Prince of Wales but
We've been shut-down in our Bunker for six days now. The Beloved went on a last grocery trip on Friday and when those salad leaves are gone, they're gone, as the radio Ad has it. Because I don't fancy washing lettuce in soapy water. But the wild garlic Allium ursinum is up in the top garden, so we'll be able to get our greens. My pal Rene [prev] came to fill his 50lt bowser with Knockroe Spring Water from our garden tap. He couldn't come in for tea, so we hung outside for an hour comparing notes about inventory.
You won't starve if you have 19 sheep
Have you drawn the dotted lines on the flanks of your donkey to show the butcher where to cut?
I won't be asking the butcher to do what I can do myself.
Absolutely, of course, we none of us want to consume limited community resources.

One of my home-made gate-posts took the closures of this week as an excuse to fail. 20 years ago, we planted 100 larch Larix europaea whips in the top garden. A few survived and a tuthhree years later I planted the surviving 20 at the top of our farm in a narrow gut between a traditional stone wall and a sheep-proof fence. Maybe 6 years ago, one of these adolescent trees fell over in a storm. Straight, as thick as my thigh, and maybe 5m tall, it was too good for firewood. So the fattest 3m became a gatepost. My neighbour helpfully said it wouldn't last and I should have used steel . . . a week after I'd finished the project.  Well I got 6 years of re-purpose out of that latch trunk and now it's ready for up the chimney.
At least I was ''working from home" and could take steps to keep the gap sheep-proof.
Posted by BobTheScientist at 07:55