I wrote a few years ago about picking fungi in the woods in NE Poland. On that expedition, I got cocky, and snagged something that looked like what everyone else was picking and was told to wash my hands or die.  Apart from that it was a successful haul of free food and my companions went home happy.  In the car going back they talked about the respected local expert on edible fungi, who had passed away earlier in the year at the age of 87. That's a grand old age for Poland and I asked what had been the cause of death. Mushrooms, they chorused: even the most knowledgeable can make an error. Much as I like free food - I was a graduate student once - I'm not in a hurry to learn the subtleties of field diagnostics for fungi. 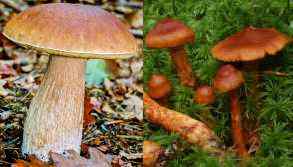 Orellanin [structure L] is a bipyridine: an aromatic compound with two pyridine rings.  A pyridine ring has a single N atom in the ring and not to be confused with pyrimidines, like the DNA bases cytosine and thymine, which have two Ns. The positively charged N residues in the pyridine ring were long known to be associated with redox toxicity before orellanin was characterised, both as to structure and killing power. Paraquat, the weed-killer and favorite among suicides [prevliyear], is also a bipyridine. Both paraquat and orellanin have an unfortunate latency between cause and effect.  By the time you are aware that something is amiss, your kidneys have suffered irreversible damage and you are looking at a [shortened] life-time of dialysis; that is if you survive the assault.

So don't do this at home, kids. Cortinarius are particularly difficult to identify because of the range of within species variability.
Posted by BobTheScientist at 06:29