There I am on the side of a hillock somewhere in the 3500 ha. wilderness of bush, boulder, bog and breck and I find an injured sheep. It is not one of ours. What to do?  Since the end of last month, I can take a picture of the ear tag, attach GPS coordinates and send it as a calling-all-cars email to the ~200 farmers who have grazing rights in the Northern Blackstairs. 10 or 100 years ago, it would have needed a named feature nearby and a data-sharing trip to the pub to reunite owner and ovine. And the hills are were , indeed, alive with the names of places; "are were" because the average age of owners on our commonage is about 65 and the ould lads who really knew all the Ould Names are dead. There are now so few users of the mountain, that an elaborate system of geographic names becomes largely redundant because who would need to know? It's like the death of another language in New Guinea: flattened out of existence by emigration, aging and English. The Blackstairs Farming Futures scheme and other Dept Aggie plans to make better use of commons, may see a revival of the old landscape names. Related: 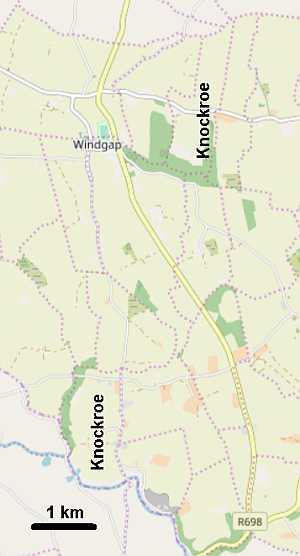 In another blobbothread, I made reference to duplication in Irish placenames, which must lead to some confusion even in these Googlemaps, GPS, Tomtom days. If I go "Knockroe, Co Carlow" on maps.google.com I land close to Home at:
Knockroe (An Cnoc Rua) , Kiltennell Civil Parish, Barony of Idrone East
because Google knows where they live, people who live 40km away N at the other Knockroe :
Knockroe (An Cnoc Rua) , Rathvilly Civil Parish, Barony of Rathvilly
will likewise be delivered to the familiar neighbourhood. But if Cousin Bubba comes to visit from Tennessee, it's evens that he'll go to the wrong place. Shows a certain want of imagination to have two Knockroes in Co Carlow and 72 (!!) across the country.  There are only 5 Woodstowns, 4 of them in Waterford. The most confusingly close pair of townlands which I can easily bring to your attention are a brace of Kilkenny Knockroes [shown R] down near Windgap and not a long way from Tipperary [from the Southerly K'roe you can gob across the Lingaun River and have your spittle land in Co Tipp - the 1km scale bar R is in Co Tipp].  By a curious coincidence, that same Kilkenny Knockroe has one of the finest examples of a neolthic passage tomb in Leinster. The site includes cup & ring marks similar to the designs we found on our own neolithic artwork, in one of the Carlow Knockroes. Actually not such an amazing coincidence because the landscape of Ireland is as rich in neolithic artifacts as a brack is full of currants.
Posted by BobTheScientist at 07:45