I wrote this last winter about the discovery of more neolithic art-work at the very edge of County Carlow.  I say more because there are lots of these carvings in the Carlow Wicklow region of Europe and Chris Corlett of the Department of the Environment has written the definitive book on the subject. Poor fellow hasn't published it yet because just when he gets it camera-ready somebody alerts him to the existence of another extraordinary chunk of our Arts-Culture-and-the-Gaeltacht that needs to be recorded.  3875m (say 7,370 Egyptian cubits) almost precisely due East of the Knockroe Ringstone is a contender for the finest example of neolithic rock art in Leinster at Rathgeran Lr.

We can work out more-or-less when the original carved stone was cleft into 4 half-ton blocks. On dit que the upland valley (the Ringstone is about 200m above sea-level) where we live wasn't settled until the last decades of the 1700s. So it wasn't before 1780. A line, representing a field boundary, appears on the first Ordnance Survey map exactly on the line of the dry-stone rubble-filled wall in which the cleft parts of the Ringstone formed the gateway. So the Ringstone was split before 1846. The tesselation of maps below all come from the truly amazing and informative zoomable, clickable, historically layered Ordnance Survey Ireland OSI map of the island.  The red + marks the Ringstone. 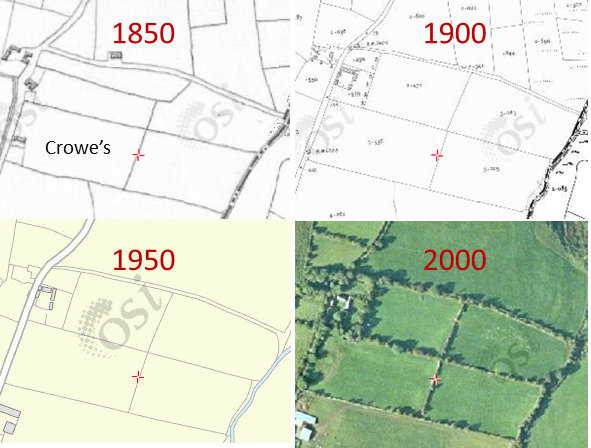 Things to note.
1) The housing arrangements changed radically between the first (1825-1846) survey and the second (1870-1910) revision.  From the 1890s to the 1990s, four 1-1.5 ha fields framed the Ringstone gate, but one of those fields was created from two long thinner '1850' fields that had, in turn, been cleared from the hillside <3 generations before.  You'd think they'd make up their minds because each change required moving hundreds of tons of stone with no more help to their hands and backs than a pick, some levers, a stone sled, and an ass-and-cart.

2) The patchwork of fields in '1850' and '1900' along the N edge of the maps that forms the background to the large red dates has disappeared in '1950'.  When the farm was sold in the 1990s, the neighbour who bought the 25 acres above the house spent as much on the hire of a Hymac tracked digger and two dumper-tractors to clear the ditches as he'd spent on the fields themselves at auction.  Six weeks saw it all tidied up and sown as pasture.  A single well directed gallon (5 lt) of petrol can do 600 man-hours of work.  And we fritter the stuff away driving to the corner shop for the newspaper.

3) The SWmost of these four fields, is known through the parish as Crowe's, so I've marked it as such on the 1850 map.  You can see the cabin where Mr and Mrs Crowe and their childer lived.  Several years ago we were digging holes in part of that field to plant a (broad-leaf, sustainable, of course) wood-lot.  Just where the black box appears on the map, the dug earth was busy with broken delph as the Irish call their dishware (It's a corruption of "Delft" in Zuid-Holland famous for its blue-and-white china).

4) A good few years ago I was leaning on the gate in my rustic fashion (straw in mouth so that the jaw didn't look all slack) when a rented people-carrier drove up the lane and de-bussed half a football team of Americans: tall, healthy and good-naturedly affable as only Americans can be. They were descendants of a widowed Mrs Hickey who had sent her oldest children to America in the aftermath of the famine and was brought there afterwards with her youngsters when the older ones grew up and made good.  The present John Hickey has done sufficient research to determine, from C19th census and estate records, that the cluster of buildings in the NW corner of the 1850 map was owned by the Hickey family, indeed it seems probable  that they owned the four fields East of the lane as well.  I sometimes feel that I'm just the care-taker waiting for the Hickeys to return and claim their patrimony like Viggo Mortensen striding into Minas Tirith.  I mention it because, this weekend, New Ross is celebrating the 50th Anniversary of the visit of JFK to the Kennedy Homestead about 50km South of here.  The Kennedys left the Sunny South-East in very similar circumstances and about the same time as the Hickeys.

I wrote in April about the relative population of Chicago and the Scullogh Gap in 1835.
Posted by BobTheScientist at 08:54