The great, the wonderful, thing about living in Ireland is that we have climate but not Weather. Climate is really mild; min night-time extreme is -19°C [Markree Co Sligo 1881] to max day-time 33°C [Kilkenny, 1887]. There have abeen a couple of months in the 20thC when there was No rainfall at particular weather stations. The highest daily rainfall dump was 243mm on 19 Sept 1993 in Kerry - Kerry is the wettest county holding the record daily precipitation in 7 or the 12 months since those records becamne reliable in 1942. It's the wettest county because it gets washed by the Gulf Stream / North Atlantic Drift which ensures that the air above the warm water holds the maximum amount of water vapour. This comes down in torrents upon landfall, so Kerry really takes one for the team in the respect making Leinster, Dublin and the East coast comparatively much drier. But nowhere near as dry as the true deserts of Chad or Chile.

The other thing we get is the played out tail ends of hurricanes which have typically started to pick up energy off the coast of Africa, travelled across the South Atlantic and up through the Caribbean, the Eastern seaboard of the USA and Canada. As they head out back East across the North Atlantic, the colder water and the coastal landmasses will have de-energised and de-watered the storm, so that we rarely get the excitement of Ophelia or Emma. Damn good thing, too.  On 2nd September 2019, because I R now officially Old, I'll be making my last 30 week run of daily 40+40km commutes, so I'm hoping [and expecting] to not live in exciting times w.r.t. weather through to Easter 2020. 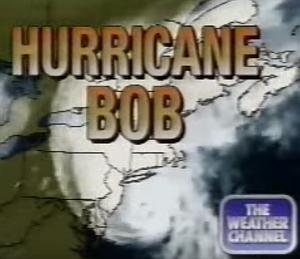 Because I'm a sucker for Eponyms [Bob the Island; Bob the Point; and so on], I thought I'd mention an extreme weather event which I missed because I had left New England 8 years earlier. Bob was born as a tropical storm off Bermuda on 16th August 1991 and slouched up the US East Coast gradually picking up speed and water and dissipating it mainly on the Outer Banks of North Carolina and a swathe of coastal New England. The following day, having integrated fresh wind-speed data, Bob was upgraded to Hurricane. Lunchtime on the 19th, Bob made another landfall at Buzzard's Bay in Southern Massachusetts. Where its effects were recorded on numerous amateur cameras. 1991 was the era of VHS cassette cameras about the size of a breadbox. Here's some footage: 25 minutes from So Dartmouth is a bit long in the edit but puts the damage in perspective: plenty of trees still up and plenty of boats afloat. Winds of a sustained 160km/h were recorded and a 2-5m storm surge lifted a lot of boats on shore where they piled up along the tide line. For the aftermath and clean-up, bring on the National Guard with combats & chain-saws. I guess you remember a storm like Bob if you lose your garage, or worse, but the impact fades quickly enough if bad things only happened to your neighbours [a rich seam in grown men doing really dopey things with chain-saws and no safety gear]
Posted by BobTheScientist at 07:30